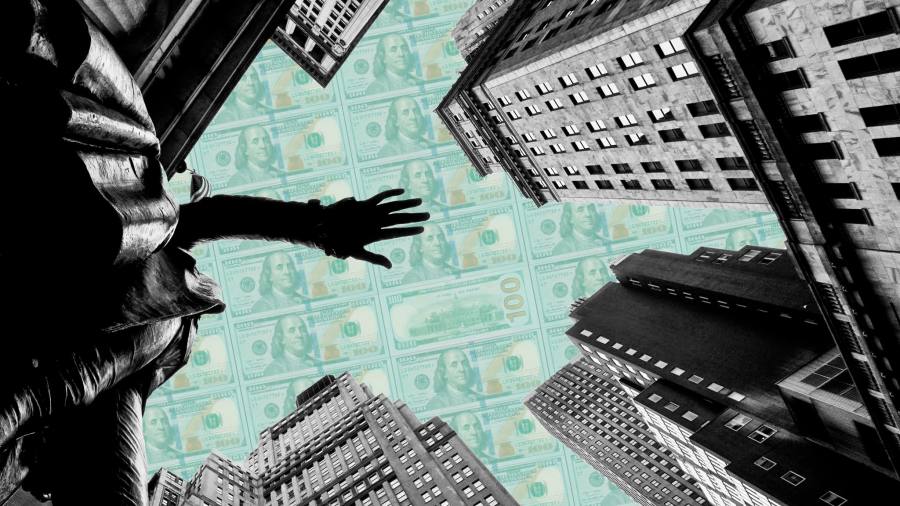 From the top floors of a skyscraper that crowns the biggest New York office development since Rockefeller Center, a few hundred highly paid executives oversee one of the most pervasive enterprises that American capitalists have ever built.

Less than half a century after it was started as a boutique investment vehicle run by two wealthy cousins, KKR has become a corporate behemoth. The firm’s $170bn lending arm manages as many assets as some regional banks, and that is just the start.

If the mosaic of assets managed by the firm’s private markets division were folded into one entity and listed on the stock market, its market capitalisation could exceed $100bn — comparable to industrial giants such as General Electric, Lockheed Martin or 3M.

Imposing a conventional corporate hierarchy on this multi-headed enterprise would be an unenviable task. With 800,000 workers, it would be one of the five biggest private sector employers in the US, with more than double the employees of Warren Buffett’s Berkshire Hathaway conglomerate.

From an office in Manhattan’s Hudson Yard development, its chief executive would preside over the mother of all annual budgeting cycles. He or she would have to wrestle reporting lines encompassing a bewildering array of 200 subsidiaries, including a shampoo brand in Switzerland, a garage door factory in Illinois, and an animal feed producer in Vietnam.

In other words, it would resemble in many ways an old-fashioned conglomerate, the discredited empire-building projects of mid-century corporate America that KKR did more than most to demolish.

The question the large PE firms are starting to face is whether this growing similarity to the sprawling conglomerates of old is becoming a liability — for them and for a US economy trying to recover from the pandemic.

By the 1980s, when KKR and the modern private equity industry began to take shape, conglomerates were losing their lustre. RCA’s scattershot acquisition spree had earned it the derisive nickname “Rugs, Chickens and Automobiles”. KKR’s infamous 1989 takeover of RJR Nabisco, a food and tobacco group that was later broken up, symbolised the end of an era.

Henry Kravis and George Roberts, the surviving members of KKR’s founding trio, stepped down as the firm’s co-chief executives this week.

During their 45-year tenure they perfected techniques of financial engineering that enabled a new type of enterprise to function more efficiently, with sharper incentives, than a conglomerate comprising the same businesses ever could.

Kravis “successfully scaled the firm to reach a level of investment activity few would have imagined possible, and built a very successful institution with a distinct culture and world view,” says Josh Lerner, an economist who studies private equity at Harvard Business School.

His techniques have been widely copied. There were nearly 7,000 private equity firms in the US in 2019, according to data from Preqin, including several that are even larger than KKR.

Wall Street investment groups have recorded unprecedented growth during the pandemic. Private equity firms struck more than $500bn worth of deals in the first half of this year, their busiest six months in four decades.

Those investments have yielded fat profits, delivering windfalls to the pension funds and other investors that ultimately own them, and helping lift private capital firms’ shares. The five biggest listed groups — Blackstone, KKR, Carlyle, Apollo and Ares — are now worth more than three times what they were during the depths of last year’s sell-off, soaring from a March 2020 low of $80bn to more than $250bn this year.

Yet as a pandemic-hit US economy struggles to regain its stride, these vast enterprises are playing an increasingly important role.

Some experts warn that private capital firms, like the traditional conglomerates they have largely supplanted, could soon exhaust their capacity to grow while still earning high returns.

“A Blackstone or a KKR is a huge conglomeration of companies,” says Steven Kaplan, an expert on private equity who teaches at the University of Chicago Booth School of Business. “[The private capital industry is] probably 10-15 per cent of the economy would be my guess, and there’s a limit to how much of the economy the model makes sense for.

“At some point,” he warns, “it could stop earning a good return.”

KKR’s public fight with RJR Nabisco chief executive Ross Johnson, chronicled in the book Barbarians at the Gate, cemented the firm’s reputation as a Wall Street wrecking ball. Yet Kravis himself has suggested his firm has more in common with capitalism’s master builders.

“Where have the Carnegies and the Mellons and the Rockefellers gone?” he mused in the early 1990s, mentally sizing up his adversaries. “A lot of them are gone. And our concept is to bring that back, to bring back that ownership.”

What drove Kravis to break up conglomerates such as Nabisco was not so much the organisations’ inherent complexity as what he considered to be the professional casualness of the C-suite old guard.

Johnson was a case in point. Here was a boss who could sincerely applaud a protégé for his capacity to “take an unlimited budget and exceed it”. By the time the RJR Nabisco boss was forced out by KKR’s record-breaking 1989 takeover of his company, Johnson had personally supervised the construction of a $12m hangar housing at least half a dozen jets that shuttled his sports star friends to expenses-paid junkets.

“Many managers and corporate America [are] the renters of the corporate assets, not the owners,” Kravis said in 1991, comparing their behaviour to a careless driver in a hire car. “If you have something at risk, you think differently.”

For John D Rockefeller, ownership of Standard Oil was an automatic consequence of entrepreneurial hard graft. But KKR was putting a new generation of corporate leaders in charge of companies that were already so valuable that few of the executives had anything like enough wealth to buy a meaningful stake.

The solution pioneered by Kravis and Roberts has since been adopted across an entire investment industry now valued at $4tn. It was for insiders to put a sliver of their own money into the giant investment vehicles that pension funds and other investors paid into to fund leveraged buyouts, while receiving a generous share of the profits when investments went well.

KKR says the firm and its executives have $30bn invested in or committed to our funds and portfolio companies. Their share of the profits could be far higher.

Investment groups and their executives typically receive 20 per cent of the profits on their investments once annual returns hit a certain threshold, despite putting up a smaller portion of the capital. On top of that, cheap equity is often doled out to senior executives at the companies that private equity firms buy.

These are “high-power incentives to [private equity] deal teams and the chief executives of the companies”, says Kaplan, who believes the economic interests given to insiders explains why the disparate collections of companies assembled by private equity have flourished even as conglomerates died. “There is a temptation inside conglomerates to have the cash cows feeding the stars. And it is very demotivating to the cash cows.”

KKR has bought hundreds of companies worth more than $650bn since 1976, when it began assembling a new kind of corporate empire, and it has turned the $122bn of capital that it has invested for clients since then into assets worth $240bn.

Yet as company valuations hit historic highs, and the private capital industry struggles to find uses for its $2.5tn war chest of unspent capital, the approach to corporate ownership pioneered by Kravis and Roberts is now being tested on an unprecedented scale.

More is riding on the outcome than the financial health of private equity firms and their investors. The US economy is struggling to meet surging demand while also adjusting to a global supply crunch and a pandemic-induced scattering of the labour force. Perhaps more than at any other moment in peacetime, the way that companies are run may shape not only private fortunes but also national destinies.

Wall Street is confident it has the superior model. “In private equity we don’t tell chief executives what to do very often,” says a senior dealmaker at one of the biggest US listed firms. “We give people the power to make their own decisions and then hold them accountable for the results.”

Defenders of the industry argue that this laissez-faire approach, made possible by a financial structure that exposes top executives only to the profits they control, has created a hyper-rational form of corporate superstructure that is less given to excesses of egotism or vanity. Some academics, including Kaplan, believe that private equity has contributed to the large gains in the profitability of the US corporate sector over the past 40 years.

But those gains have been accompanied by a sharp decline in the share of economic output received by workers — an uncomfortable mix for an industry that has been uncompromising in its search for search for efficiencies at businesses such as supermarkets, manufacturers and other large employers.

Earlier this year, an academic study of 30 years’ worth of private equity buyouts found that private equity-backed acquisitions of publicly listed companies were followed by a 13 per cent contraction in payrolls, although employment actually went up when investment firms bought from other private owners.

A new kind of jet-set

For the executives brought in to run the companies they have bought, private equity ownership brings a different kind of stricture. Like the best-organised conglomerates, big private equity firms have set up internal consulting arms to look for ways to iron out inefficiencies in their companies, and purchasing teams that harness their companies’ collective clout to drive a hard bargain with suppliers. The huge debts that firms load on to their portfolio companies can magnify the eventual returns to shareholders, but also force executives to walk a tightrope between huge financial rewards and potential bankruptcy.

Long after it eclipsed RJR Nabisco, KKR still does not own any private jets for the use of its executives. But some KKR executives own their own aircraft, including Kravis and Roberts, who pay out of their own pockets for the pilots and maintenance.

Set against that are the enormous transfers of wealth from investors to managers that have minted nearly two dozen multibillionaires among private equity executives since 2005, according to a University of Oxford study published last year.

Yet some believe the 1980s chief executives who spent company money on lavish perks are ultimately not so different from the private equity executives who have amassed so much money that they can afford to become leading patrons of cultural institutions, donors to political causes — and pay for private jets themselves.

“What did Kravis produce to get that money?” asks Eileen Appelbaum, who is co-director of the Center for Economic and Policy Research, and a vocal critic of private equity. “What private equity firms do is extract wealth from companies.”

Even KKR picks up a tab when its billionaire founders and other top executives use their planes for work. There were fewer such trips than usual last year, as a global pandemic halted most business travel. Yet the cost still ran to $1.7m.