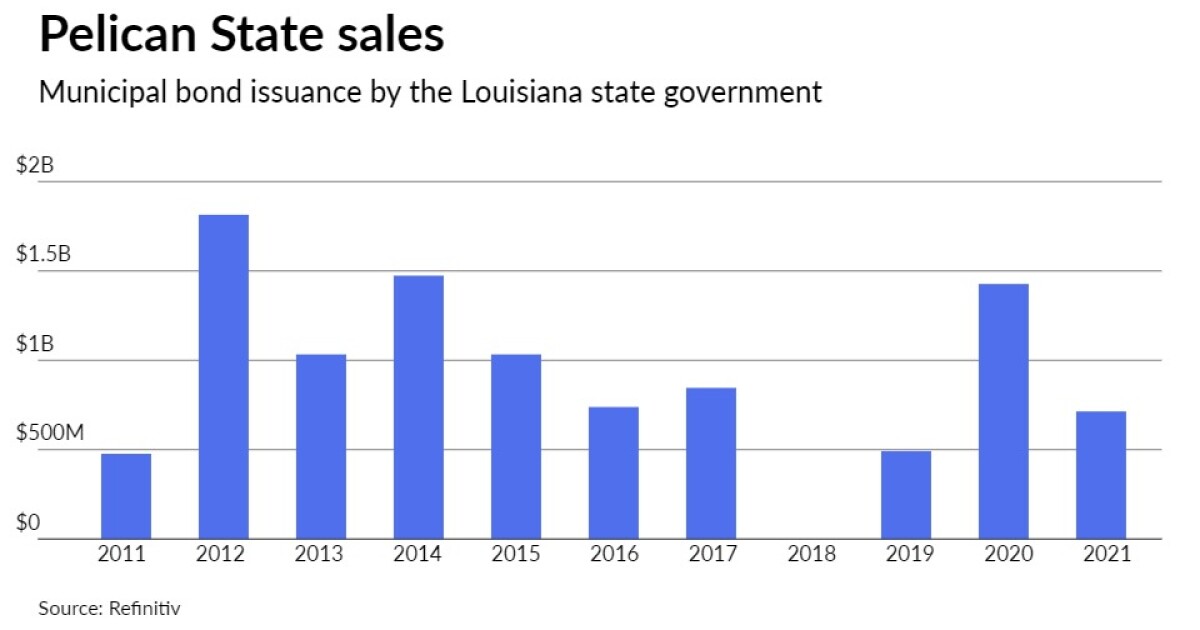 The state of Louisiana is coming to market this week with over $650 million of bonds, the first sale since the state disqualified one of its negotiated underwriters for not meeting the state’s pro-gun policy litmus test.

The Series 2022 bonds will be issued as first lien bonds. About $2.53 billion of first and second lien gasoline and fuels tax debt is outstanding.

“We are anticipating a substantial present value savings as a result of our being proactive,” Pamela Matassa Hayes, communications director for state Treasurer John Schroder, told The Bond Buyer.

The sale had originally been slated for approval in October, but the vote was delayed until November as the commission sought additional information and clarification about J.P. Morgan’s policies on gun control.

At its Nov. 18 meeting, the Bond Commission disqualified J.P. Morgan Chase from underwriting the refinancing due to unanswered questions about its gun policies and recommend that Wells Fargo underwrite the deal.

The bonds are rated Aa2 by Moody’s Investors Service and AA-minus by S&P Global Ratings. Both agencies maintain stable outlooks.

Proceeds will refund all or part of the state’s outstanding Series 2015A gasoline and fuels tax revenue refunding bonds.

The issue is secured with pledged gasoline and fuels taxes on a senior lien basis.

Moody’s said the state’s gas and fuels tax bonds benefit from strong legal provisions that include “constitutional protections of revenues for transportation purposes, no appropriation risk, and healthy current coverage by pledged revenues.” The senior lien on pledged revenues is closed except for refundings.

“In the flow of funds, a portion of the pledged revenues must first flow through the state’s Bond Security and Redemption Fund, to which the subordinate lien has greater exposure. The transportation-related revenues pledged to the bonds are tied to the energy-dependent state’s volatile economic and financial condition.”

Moody’s said its stable outlook “reflects our expectation that revenue trends will continue to provide adequate and stable coverage of debt service.”

It cited as supporting factors strong debt service coverage, a large tax base with collections that have improved since the onset of the pandemic, and a closed lien on the first-lien gas tax bonds and current legislation limiting additional issuance of parity second-lien gas tax bonds.
The Series 2022A bonds are tentatively structured as serials due May 1 running from 2032 to 2041 with a term bond due at a time to be determined.

At its Dec. 16 meeting, the Bond Commission heard from Commission Director Lela Folse, who gave a final update on the bond sale.

The state has provided an opportunity for existing taxable bondholders to tender their bonds which would be purchased with proceeds from the Series 2022A taxables.

Additionally, a tax-exempt tranche of Series 2022B bonds may be added at the time of this week’s pricing, since the state also provided tax-exempt bondholders a chance to tender their bonds.

Schroder noted at the November meeting that J.P. Morgan was only being disqualified from this offering and was not being removed from the state’s list of approved underwriters for negotiated deals.

Competitive sales are not affected and all underwriters are able to bid on any competitive offerings the state might sell.

Muni rates have been volatile in the past several months and 2022 has brought higher yields. Investors have been concerned about rising interest rates as well as the lingering effects of the coronavirus pandemic, rising inflation and the possibility of increased regulation.
Looking at the AAA GO benchmark scales, the 10-year muni was at 1.19% on Tuesday, according to Refinitiv Municipal Market Data, up 16 basis points from 1.03% at the time of the commission’s meeting last month. The 30-year muni was trading at 1.65% Tuesday, up 17 basis points from 1.48% on Dec. 16.

The state Department of Transportation and Development said 2021 was not a bad year overall by its measures despite the lingering effects of the pandemic.

DOTD said that 228 road projects were approved across the state, equaling an investment of $630.8 million last year. It noted the department employed several different funding methods, such as issuing grant anticipation revenue vehicle bonds, using public-private partnerships and design-build contracts. This allowed DOTD to continue several large-scale projects that had been halted due to lack of funding and to start several new ones.

“While the year was yet another challenging one due to COVID-19 and Hurricane Ida, we were able to achieve numerous milestones,” DOTD Secretary Shawn Wilson said in a yearly roundup. “We’ve started and completed several major projects, and probably the biggest success stories for the department this past year have been the passage of the bipartisan Infrastructure Investment and Jobs Act (IIJA) by Congress, and the signing of the vehicle sales tax legislation.”

He noted Louisiana is set to receive almost $6 billion in federal funding over the next five years from IIJA and will begin receiving at least $150 million in fiscal 2023-2024 from vehicle taxes.

“I’m proud of the things we’ve accomplished in 2021 and I’m extremely optimistic for 2022 and the years beyond,” he said.

Also at the commission meeting last month, a supplemental resolution was adopted by the panel for the issuance of up to $280 million of general obligation refunding bonds to refund outstanding Series 2014A GOs.

The state’s GOs are rated Aa3 by Moody’s and AA-minus by S&P and Fitch Ratings.