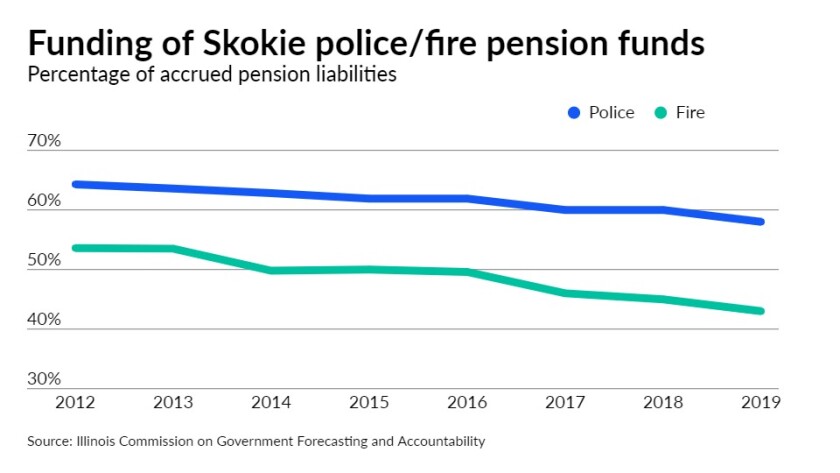 The Chicago suburb of Skokie joins the wave of Illinois local governments borrowing to manage rising public safety pension costs with a $176 million issue that will wipe out most of its unfunded liability.

The taxable deal offers a $150 million series and a $26 million series. About $135 million will be used to pay down unfunded pension liabilities to bring the funded ratio to 90% far ahead of a 2040 state mandate.

Another $13.5 million from the sale will go into a budget stabilization fund that’s “intended to provide additional funding should the unfunded liability increase in any year during repayment, due to less-than-target returns, or actuarial changes,” Julian Prendi, the village’s finance director, said in an email.

The borrowing will bring the village’s outstanding general obligation debt to $222 million.

The smaller B series proceeds will fund tax-increment financing improvements. Baird is the senior manager and Stifel is co-senior.

“The primary motive is to control the growth of the annual funding requirement, which, because of the state-mandated 2040 funding deadline increases to unsustainable levels in the out years,” Prendi said.

The sale marks the village’s first foray into pension obligation borrowing which has seen an uptick among local governments in Illinois grappling with rising contributions that are straining budgets. The wave could accelerate as the window closes on low interest rates with Federal Reserve rate hikes expected this year.

The Government Finance Officers Association recommends against POBs because of the risks that investment earnings will fall short of debt service driving up overall costs. The use of POBs has had mixed impacts on issuers’ ratings depending on the size of the burden, debt levels, and the structure of the borrowing with higher-rated governments better able to absorb the market and budgetary risks.

For Skokie, the move provides long-term benefits by easing an upcoming pension contribution spike but it still poses market-related risks.

Fitch Ratings and S&P Global Ratings affirmed the city’s ratings at AA-plus and AA, respectively. Both assign a stable outlook.

“Fitch considers Skokie’s issuance of POBs as neutral to credit quality as the decline in pension contributions is offset by higher debt service while the unfunded pension liability is replaced by bonded debt,” analysts said.

“Recognizing the upward trajectory of its pension contributions, officials have structured their pension obligation bonds for greater savings in 2028 and beyond, when they project contributions would accelerate significantly,” S&P said. The near-term savings are negligible.

While the structure is a plus that helps stabilize the funding demands in the future, payments “could increase unexpectedly due to market volatility risk,” S&P warns.

Annual debt service for the POBs is relatively flat for the 20-year issuance. The bulk of the estimated net present value savings of $64 million is realized in the final 11 years of the bond structure and derived from lower debt service costs compared to projected required pension payments.

“As the bond structure seeks to maximize cash flow savings relative to current assumptions, the investment returns on the bond proceeds must exceed the cost of borrowing for this issue over time in order to result in savings,” Fitch said.

The police pension account is currently 72.3% funded and the firefighters’ plan is 55.9% funded for a combined total of 64%. Net direct debt as a percent of government revenue increases from 89% to 230%, near-term carrying charges for pension and OPEB decrease from 13.2% to 3.2%; and near-term debt service increases from 6.3% to 16.5%, S&P said of the impact on the village’s financial metrics.

If Illinois governments don’t adhere to the 2040 state mandate the local pension funds can file claims to intercept various tax or grant revenues that flow through the state.

The unfunded tab for the 295 firefighter funds and 352 police funds outside of Chicago grew to $13 billion in fiscal 2019 from $12.3 billion in 2018 and $11.5 billion in 2017. Police accounted for $7.5 billion of the total and firefighters for $5.5 billion, according to a recent report published by the Illinois Commission on Government Forecasting and Accountability.