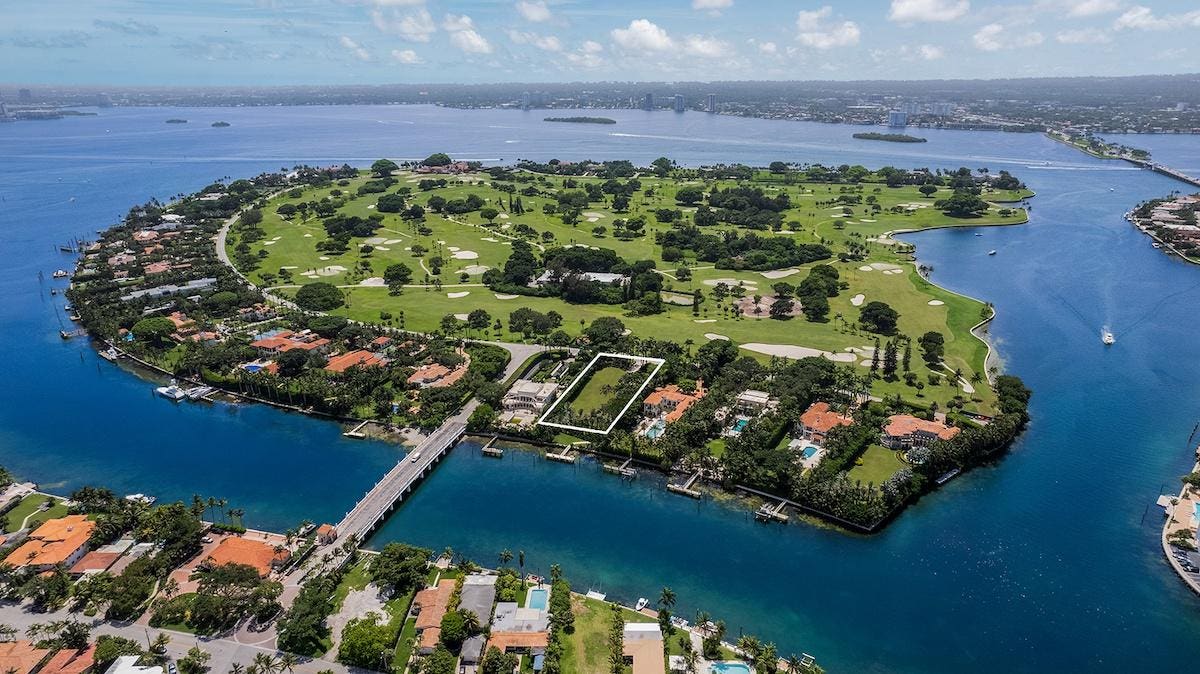 For roughly 1,903 Bitcoin at today’s conversion rate, Ivanka Trump, Spanish crooner Julio Iglesias, supermodel Adriana Lima, and dozens of other A-listers and titans of industry could soon become your neighbors in Miami’s most coveted address.

Locally known as “Billionaire Bunker”, Indian Creek Island on Biscayne Bay on the backside of Miami Beach is by almost every measure the most exclusive, secure, and celebrity-saturated residential enclave in America (sorry Hamptons and Palo Alto). If it had its own zip code, it would be the most expensive as well, with most properties trading hands these days for north of $40 million.

“Indian Creek is the equivalent of St. Jean Cap Ferrat in the south of France or Field Point Circle in Greenwich, Connecticut,” says Douglas Elliman’s Dina Goldentayer, who has the listing, of similar micro-UHNW real estate vortices around the world. “Every estate is significant and magnificent in its own right. And any address here is a signifier of true wealth, success, and exclusivity.”

For Indian Creek Island’s current 40 residents—many of whom already pay millions annually for privacy and security everywhere else they go—that’s exactly the way they like it.

The roughly 300-acre island is accessible only by a two-lane, gated bridge stationed by armed guards. It also maintains its own round the clock, 13-person police force and marine patrol to repel the tourists and paparazzi who read articles like this one and figure this is their best shot to get a glimpse of Tom Brady and Gisele Bündchen, who recently dropped $17 million on the island for a “tear down” estate.

Indian Creek Country Club, whose William Flynn-designed golf course has fewer members than Augusta, also takes up the entire center of the island which means that no new development can ever take place so exclusive always will remain exclusive.

Notwithstanding Indian Creek’s already hefty price tag for privacy, the island’s newest listing, 37 Indian Creek Island Road, is about to set an even higher ceiling shattering record, hitting the market this week at $59 million. And given Miami’s currently supercharged luxury real estate market these days, there’s a good chance it will trade for more than that.

The spec mansion is being built by iconic Miami Beach developer Todd Michael Glaser and three partners, who bought the property last summer from legendary Latin variety show host Mario Luis Kreutzberger Blumenfeld a.k.a “Don Francisco” for $24 million in an off-market deal that also was represented by Elliman’s Goldentayer (it’s been a good year for her). After the deal closed, the partnership promptly announced plans to demolish Blumenfeld’s existing 1987 home and replace it with something more befitting a modern-day Bitcoin billionaire looking for a statement property.

“I’m always looking for opportunities and trophy estates where I can build,” says Glaser of the opportunity to design something on Indian Creek for the first time. “When Dina brought me the pocket listing for this property, I knew I could create something special here.”

The main level’s 12’ ceilings will house a club room, chef and prep kitchens, a media room, and a full gym and exercise studio, while the waterfront backyard includes 134’ of bay frontage, dockage for yachts up to 110’, tropical arboretum-quality landscaping, an expansive waterfront deck, and a pool and tanning beds perfectly placed to watch the sun rise and set.

On the logic behind accepting Bitcoin as a formal currency for the property, Glaser is the typically pithy self he’s become known for. “If Gucci accepts bitcoin, then Todd Michael Glaser will too.”

Elliman’s Goldentayer, however, is slightly more bullish on the longer-term potential for the space where cryptocurrencies and luxury real estate meet.

“37 Indian Creek will be the most high-profile crypto transaction of its kind in America if it sells in Bitcoin because of where it’s located,” she tells me. “The current record is held by a lower penthouse at Arte Surfside that accepted crypto for a $22.5 million transaction in 2021. But this property has the potential to set records not only for crypto, but also for Indian Creek. This means that as more methods of crypto conversion become popularized, and sellers become more comfortable with the process, this property can change everything in Miami and beyond.”

As for the buyer, says Goldentayer, they need to believe in the pleasure delayer principle first and foremost since the house will take between 18 months to complete. The buyer also needs a lot of friends or grandchildren.

“As its massive in size, I could see a large family or a tech bachelor with an extended entourage to be drawn to this private enclave. I’m also going after the buyer who loves modern architecture since Kobi Karp’s design is the embodiment of Miami’s ultra-luxury modernist movement.”

On the property’s essential modern design and amenities, Glaser agrees that there was no other way to go given the location and potential clientele.

“I’ve been building luxury homes for over 20 years here,” says Glaser. “Modern has always been my go-to in Miami Beach. It sells. This time will be no different.”

The biggest question now is whether 37 Indian Creek will sell on blockchain or the old-fashioned way. And the implications for real estate are much bigger than who Tom and Giselle have for their next neighbors.