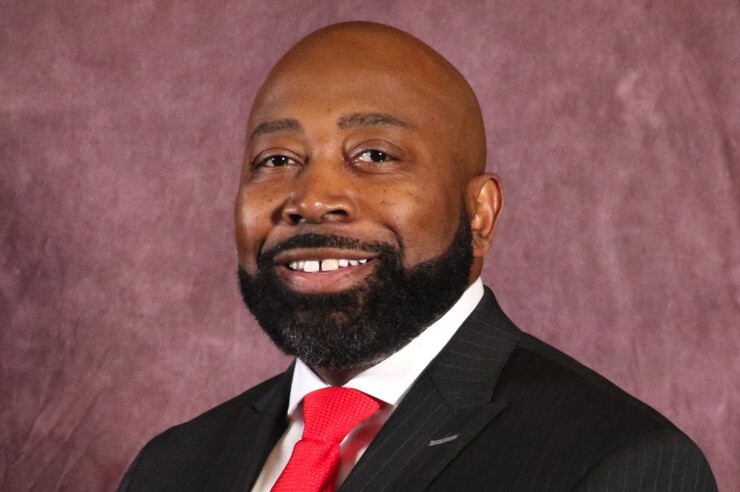 Michael Bryant’s tenure as president of the Government Finance Officers Association came as the role of the government finance officer has arguably never been more important.

That may be the sentiment that comes to define Michael Bryant’s tenure as GFOA president, a time in which state and local governments received huge infusions of federal relief money to battle the economic effects of the pandemic. Bryant spent much of his time working to empower the many finance departments trying to pull their respective states, cities and localities out of the pitfalls caused by the extraordinary public health crisis.

“Although the pandemic presented challenges, there was a silver lining in receiving financial assistance that, if utilized and invested correctly, would certainly improve the quality of life in our communities,” said Bryant, who is assistant county manager for the County of Mecklenburg, North Carolina. “This is a once in a lifetime, once in a career opportunity that you get this type of financial support from the federal government.”

Finance officers have always been tasked with providing support for their respective communities, but Bryant believes this rare moment affords the opportunity for government finance officers to have a direct impact on the lives and well-being of all the constituents they serve.

GFOA is the go-to resource for finance officers in managing and reporting on COVID-19 funds and Bryant feels a responsibility for officers around the country to effectively respond to the current moment.

“I think it shines a spotlight on the value added of the finance officer in managing, and helping to manage and respond to events, such as a pandemic,” Bryant said.

Some local governments have established their own dedicated units or sections of individuals to handle the COVID-19 relief funds, but collaboration with the finance team is inevitable.

“However you shake it, the finance officer will be involved in that,” Bryant said. But even after finance officers have dispersed much of their federal pandemic aid, they will still play an important role for years to come.

“There’s gonna be an audit that’s gonna follow,” Bryant said. “Again, finance is at the table, helping influence the decisions associated with how this money is going to be spent.”

Bryant has worked managing city, county and state finances for 20-plus years, 15 of which he has been a member of GFOA. From 2017 to 2020, he was also a member of GFOA’s executive board.

Bryant took the reins from St. Louis Sewer District director of finance Marion Gee, who led the organization through some of its toughest times in recent memory, battling through a pandemic that saw many state and local budgets plummet as a result of COVID-19 related shutdowns. With decades of public finance experience, Bryant was well-positioned to lead the GFOA into a new era.

Despite government finance officers experiencing some fiscal shortfalls in the recent past, GFOA has continued to grow its base during this time, highlighting the importance that GFOA plays to its various members.

“We didn’t skip a beat,” Bryant said. “Unlike so many other of our brother associations, we have continued to grow our membership, which is also good during these challenging times,” he added. “I’m certainly pleased with that.”

Bryant originally hails from Fayetteville, North Carolina and stayed local for college, attending North Carolina Central University, a historically Black university in Durham.  Beginning his career as an entry-level budget analyst for Mecklenburg County, Bryant has stayed on and continued his work to his current role as deputy county manager in North Carolina’s second-largest county by population.

As President of GFOA, Bryant enjoyed visiting the many public finance officials that, like him, recently returned to an in-person working environment.

“With the pandemic moving behind us, knock on wood, I’ve enjoyed being able to visit so many of our state associations who’ve also returned in person,” Bryant said. “Being able to travel and attend their conferences and speak on behalf of national was good, and reminding them how supportive we are of what they do is very important to me,” Bryant said.

Bryant has long been a champion of diversity and racial justice, having established partnerships with minority-led groups such as the National Forum for Black Public Administrators. His continued commitment can also be highlighted in the March 2021 policy paper requesting market participants not to continue using the decades-old acronym for Comprehensive Annual Financial Report, which when spoken closely resembles a racial slur historically aimed at Black South Africans.

“That’s unheard of,” Bryant said. “I’m proud of the policy statement that we issued to end the acronym that was associated with the Comprehensive Annual Financial Report because when pronounced, it’s offensive and derogatory,” Bryant said. “We’ve learned about that term that has been in place for so many years and that was well received by our members,” he added.

When Bryant began his term as president, he indicated that a key to his success as a public finance director has been the three P’s: people, process and policy. Like many others, cultivating the next generation of public finance officers has slowed as a result of the pandemic and what many are calling the great resignation.

“We know that, in general, it is a challenge to attract and retain young professionals and one of the many ways we’ve tried to respond to that challenge is by creating student chapters, at our local universities and colleges,” Bryant said. “One of the things that was out of our control, as well as another priority that we have is recruiting the next generation of finance officers.”

The GFOA Student Chapter program was launched in 2018, where students can join or create their own student chapter to educate themselves ahead of graduation and get a jump start on a career in public finance.

But with many colleges and universities conducting remote learning for the better part of two years, GFOA is just beginning to reconnect with many of those programs.

“The strategy was beginning to be realized and the pandemic threw a monkey wrench in that,” Bryant said.  “Colleges and universities shut down in person classes and meetings and that had an impact on us,” he added. “With that being behind us again, we are recommitting to that initiative that I believe will be effective in attracting and retaining new, younger talent into our field.”

Bryant views the “Great Resignation” as one of the most significant areas impacting GFOA at the moment. Under the leadership of incoming President Terri Velasquez, GFOA will continue its efforts on talent recruitment and retention as well as member engagement.

“I know she’s gonna be a great president,” Bryant said. “She has a passion for GFOA that is to be admired.”

“I’ll still be an officer as immediate past president but my advice to them is just don’t lose sight of the value added, the return on investment of being a member of GFOA,” Bryant said. “Focus on our membership and make sure that the work that we do is relevant to speak to and addresses the challenges that are all that our members are experiencing.”