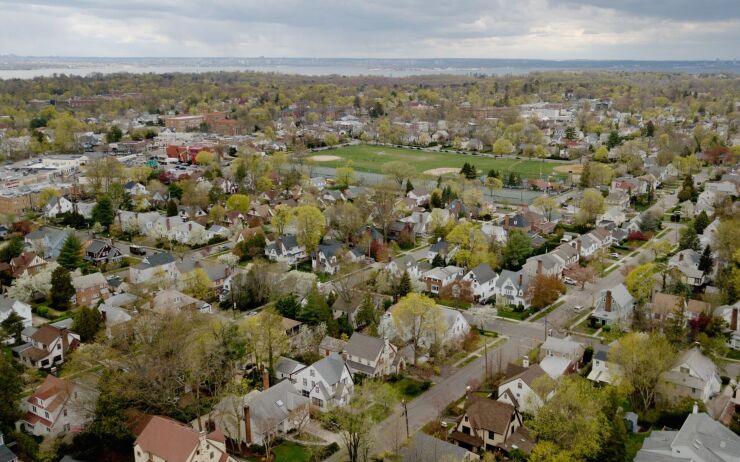 Fresh off two rating upgrades, Nassau County, New York, is heading into the market with a competitive sale of $241 million of Series 2022A tax-exempt general obligation improvement bonds.

Both Moody’s Investors Service and S&P Global Ratings raised their ratings on the county’s bonds ahead of Tuesday’s sale.

Moody’s raised its rating on the county’s GOs to A1 from A2 on May 25, a rating that applies to the new Series 2022A bonds. It continued its positive rating outlook Moody’s also upgraded the Nassau Health Care Corp.’s county-guaranteed bonds to A1 from A2.

On May 27, S&P raised the long-term and underlying rating on the county to AA-minus from A-plus and assigned an AA-minus rating to the Series 2022A GOs. S&P assigns a stable outlook on the credit.

“My administration is committed to solving problems swept under the rug in previous administrations and returning the county to a strong fiscal footing,” County Executive Bruce Blakeman told The Bond Buyer. “These upgrades affirm our leadership in managing the county in an efficient and fiscally prudent regimen.”

The county has about $1.6 billion of limited tax GOs outstanding.

The upgrade “reflects a significantly improved financial position that is likely to continue through 2022 given conservative budget management,” Moody’s said. “The county was also able to eliminate or reduce a number of liabilities, significantly reducing recurring expenses. Given the substantial improvements in budget management over the past three years, governance is a driver of the rating action. The rating additionally factors a very healthy and sizeable tax base, strong resident income levels and an elevated but manageable long-term liability profile.”

Moody’s said the positive outlook reflects its expectation that operations will drive further growth in reserves and liquidity.

Christopher Boyle, the county executive’s communications officer, told The Bond Buyer that this is the first upgrade the county has seen in over a decade.

“This county has turned the page financially — from being just about broke to being fiscally sound and on a sound footing,” he said. “We are looking good going forward in regards as to what the county will look like for the next few years.”

He added that while there was still uncertainty in the economy, the county is well positioned to stay in good financial shape should there be any downturns in the current economic environment.

Moody’s noted the county benefits from a large wealthy suburban New York City tax base. The county’s financial position, based on budgetary results, has improved significantly in 2021 with further growth expected in 2022, the agency said. The budget is balanced with a significant decrease in debt service.

“Additionally, the county benefits from strong state oversight of its finances,” Moody’s said. “The county’s debt, which includes a significant amount of debt issued by the Nassau County Interim Finance Authority, is manageable.”

The NIFA-approved county 2022 operating budget totaled $3.5 billion, up 7% from the 2021 budget. So far this year, current sales tax collections have been exceeding estimates by 2.5%, or $34 million.

The budget doesn’t include $397 million in funds from the American Rescue Plan. The county has said it plans to use some of the ARPA funds to aid its economic recovery, enhance social services and for water conservation programs.

Moody’s did note the county is exposed to debt of the Health Care Corp. NIFA has stepped up its oversight of the corporation in an attempt to not rely on county subsidies to support hospital operations. The Health Care Corp. has about $135 million of county-guaranteed bonds outstanding.

NIFA, which has controlled the finances of the county since 2011, approved the issuance of the Series 2022A bonds, as required by law.

Moody’s revised its outlook on the county to positive from stable in March 2021, citing three straight years of improved financial results. It was the first rating shift by Moody’s since October 2012 when the agency downgraded the county to A2.

“The rating action reflects our view of substantial improvement in the county’s available reserves to nearly $261 million, or about 9% of adjusted expenditures at fiscal year-end 2020 (Dec. 31),” S&P said. “In addition, the rating action reflects our view of the county’s reduction in previous pension deferrals by almost $123 million (78% of the amount outstanding) and its settlement of a labor longevity pay liability that will also reduce the benefit for future contract settlements.”

Fitch Ratings affirmed its A issuer default and GO bond rating for the county May 26,
along with A rating on the Health Care Corp.’s outstanding county-guaranteed bonds.

In March, Fitch revised the county’s outlook to stable from negative citing its expectation the county’s financial resilience would continue to stabilize given increases in operating reserves which could offset possible spending increases.

“A portion of strong sales tax collections in 2021 were set aside to fund ongoing spending demands, including litigation settlements and potential support for the health care system, a component unit of the county, which will help to minimize the pace of spending growth over time and maintain stable financial operations,” Fitch said. “The county’s ability to reduce its reliance on non-recurring budget actions, while maintaining current general fund balance levels over time could lead to positive rating pressure.”

The improvement bonds are general obligations of the county backed by its full faith and credit. All of the taxable real property within the county is subject to ad valorem taxes to pay both the principal of and interest on the bonds.

Moody’s evaluates the GO bonds as limited tax GOs because of limitations under New York State law on property tax levy increases. The lack of distinction between the A1 limited tax GO rating and the A1 issuer rating reflects the county legislature’s ability to override the property tax cap and the faith and credit pledge in support of debt service, the rating agency said.

PFM Financial Advisors LLC is the financial advisor on the sale which is set for auction at 10 a.m. EDT Tuesday. Orrick Herrington is the bond counsel.

Proceeds from the sale will fund various capital infrastructure projects throughout the county.

Boyle said the county was hoping to get some good rates in the marketplace.

Mary Francoeur, managing director at PFM Financial Advisors, said the market was starting to get a bit better and this could benefit the sale.

“We’re thankful that there’s been some improvement in the market,” she told The Bond Buyer. “So between the upgrades and some improved market conditions, we’re looking forward to Tuesday.”

UK to suffer high inflation longer than other nations, warns Bailey
Traders debate whether Solana (SOL) is a buy now that it’s down 87% from its all-time high
Bitcoin price drops 3% to ten-day lows as Ethereum inches closer to $1K
True Luxury Is Built To Last
WAPA approves budget it says stops cash loss