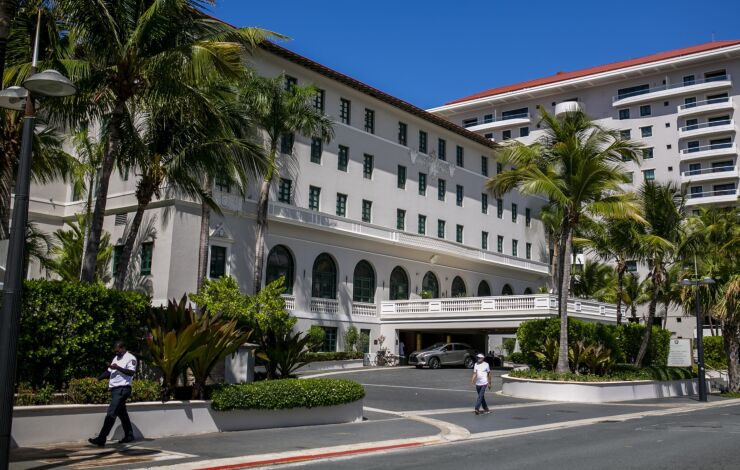 Puerto Rico’s Economic Activity Index declined in April from the month prior, even as its employment situation improved, while employment data from the U.S. Bureau of Labor Statistics was more uniformly positive.

The Economic Activity Index declined by 0.3% in April compared to its March level, the Economic Development Bank for Puerto Rico said Thursday. The index was up 1.1% from six month earlier and 3.5% year-over-year.

Puerto Rico’s Economic Activity Index is based on four measures: total non-farm payroll employment, electric power generation, gasoline consumption, and cement sales. In April compared to March, employment and cement sales were up while the other two measures were down. Compared to a year earlier, only electric power generation was down while the others were up.

Over the last five years the index was up 1.5% through April.

The U.S. Bureau of Labor Statistics’s household survey showed that April employment was up 0.06% from a month earlier, 7.4% from a year earlier, and 15.1% from five years ago.

The bureau also releases a survey of establishments to determine employment changes and patterns, which showed nonfarm employment in April was up 0.6% from a month earlier, 2.1% from a year earlier, and 3.5% from five years ago.

The establishment survey indicated that private sector employment in April was up 0.6% from a month earlier, 7.4% from a year earlier, and 8.6% from five years earlier.

The establishment survey does not cover agricultural employment or self-employment. All the employment numbers presented are seasonally adjusted.

Puerto Rico’s Estudios Técnicos business and economy consulting firm on Wednesday released its semi-annual index of small- and medium-sized business sentiment on the island showing increasing pessimism about the future, with the Business Confidence Index slipping to 63.5% from 71.9% in November.

Bondholders, other creditors, the Puerto Rico Oversight Board, the unions and pensioners of the Puerto Rico Electric Power Authority, and Gov. Pedro Pierluisi are currently negotiating a new restructuring deal for the authority’s debt. This would include terms affecting Puerto Rico’s electric rates.

Puerto Rico currently has the highest number of average daily cases per 100,000 people of COVID-19 in the country of any state or territory, according to New York Times compiled data, at 127. This is contributing to business problems maintaining staffing.

The economic statistics affect PREPA’s fiscal plans and debt negotiations and how the municipal bond community views its central government debt on the secondary market.

Reich moves from city of Dallas to DART
Bitcoin mining stocks rebound sharply despite a 70% drop in BTC miners’ revenue
Infamous North Korean hacker group identified as suspect for $100M Harmony attack
New Jersey’s fiscal year 2023 budget will be its largest ever
Better days ahead with crypto deleveraging coming to an end: JPMorgan