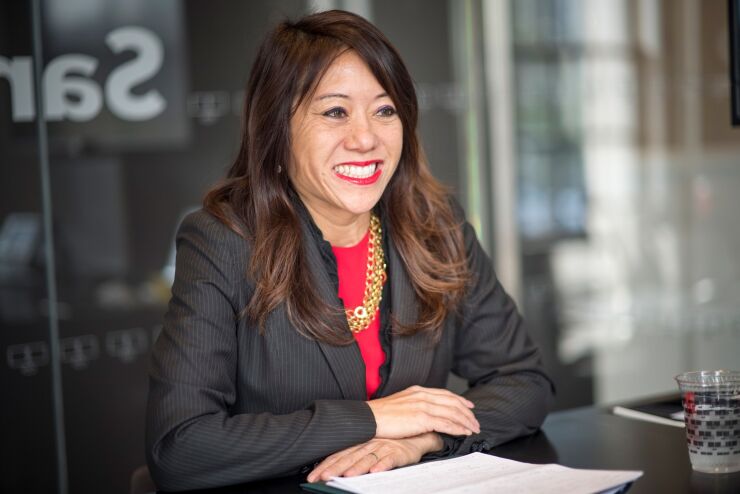 Change is afoot at one of the nation’s largest municipal bond issuers, even if the head of the office wins reelection as expected.

Three of her top deputies are stepping down, including Tim Schaefer, deputy for public finance, so she would start a second term with a revamped top team.

Though she plans to continue to stay on top of issues like the housing crisis as well as her efforts to diversify the finance teams that work on the state’s bonds, Ma said she has newer priorities as well.

Ma won 57% of the vote in the June primary, compared to 22% for Republican Jack Guerrero, so her chances of winning on Nov. 8 are strong. California state primaries send the top two finishers to a November runoff, regardless of party.

Guerrero would face a steep electoral climb in the deep blue state.

Like Ma, he is a certified public accountant. He is a city council member in Cudahy, an east Los Angeles County city.

The State Treasurer’s Office issues bonds, invests state money and manages financial operations. In a typical year, the treasurer’s office processes $2 trillion of payments and provides oversight for an investment portfolio of more than $124 billion, in addition to issuing tens of billions of bonds for the state directly and through its conduits.

The treasurer said she expects the same margin of victory as she had in 2018, when she received more votes than Gov. Gavin Newsom, who also seems headed for a second term.

“I have been working hard,” Ma said. “I think I have been doing a good job as treasurer. I have been traveling the state helping cities, counties, and special districts with projects.”

Ma said she visited 12 of the 13 children’s hospitals in recent weeks as well as green energy recycling companies.

“I think people know that I take my job seriously,” Ma said. “They understand that I care about the position and have more that I want to accomplish over the next four years.”

Despite the overhang of allegations from a former employee, Ma said she has retained support from the same organizations she had in 2018. She says what occurred is not a “me too” moment, but allegations from a disgruntled employee.

Judith Blackwell, who at one point oversaw two key housing finance agencies, made the allegations in a lawsuit filed in July 2021 in state court in Sacramento. Blackwell said Ma fired her without providing any reason and also claimed the treasurer had terminated other senior Black employees.

If it were a “me too,” situation, Ma said, more than a year after the allegations came to light, more people would have come forward with similar allegations, and they have not. The matter will not be resolved before the election, because Ma says she wants it to go to trial.

Challenger Guerrero has professional credentials that match the treasurer’s job, having worked as an auditor and consultant for Fortune 500 and international firms after getting a bachelor’s degree from Stanford University and an MBA from Harvard.

His campaign focuses on issues like tax rates and spending that are out of the purview of the State Treasurer’s Office. He told the Los Angeles Times he would spend time in the state legislature to warn against spending bills.

The state treasurer does have a seat on the board of California’s two major public pension funds, and Guerrero said he would work to lower their discount rates and push to end defined benefit pensions.

Guerrero is also forthright about wanting to ban abortions, which may be an obstacle in a state where a ballot referendum to protect abortion rights faired strongly in an independent public September poll.

Ma said her second term would continue to prioritize solutions to the state’s affordable housing crisis, along with programs that help level the playing field for diverse groups who have never been beneficiaries of the Golden State’s economic engine.

The treasurer’s office won the Bond Buyer’s Deal of the Year award for its No Place Like Home bonds in 2020, a program created through 2016 legislation that provides funding to cities and counties for supportive housing projects.

The state sold bonds for the first time to build student housing at community colleges during Ma’s tenure, and started the “Dream for All” program to help first-time homebuyers with down payments for mortgages.

The treasurer’s office has also made sure different agencies are using the same deadlines and definitions, streamlining the application process. Plus, she combined two of the agencies that deal with housing under one director.

A green bond committee is a priority for her, and that work will be taken up by the successor to Schaefer, who represented the treasurer’s office on the committee.

Ma said assuming she wins, she will announce replacements for Schaefer and others who aren’t continuing on into her next term the day after the election.

Her chief of staff, Genevieve Jopanda, and Audrey Noda, deputy treasurer for health & education, are also leaving, as well as another appointment she has not filled, she said.

“I will be starting with a new leadership team for the next four years,” Ma said.

She noted, however, that while she brought Jopanda with her from the Board of Equalization, the other two deputies were appointed by her predecessor, John Chiang. It made sense initially to leave them in place, Ma said.

“The deputies accomplished a lot in the first four years, but I want to do other things,” Ma said. “It’s also not a civil service job where people are expected to serve 20 years. Typically, deputies serve one term.”

Among the programs she is focused on are loan loss guarantees for small businesses through federal money through the State Small Business Credit Initiative created when President Biden signed the American Rescue Plan Act in March 2021. The new program provides $10 billion to states and the District of Columbia. One of Ma’s priorities during the height of the pandemic was aiding small businesses.

She also has been working on CalKids, a $200 million program created by lawmakers that would place money in a savings account for babies born after July 21.

The program places $25 to $100 in an account that would grow for 18 years, and the children can use the fund toward community college, university or an apprenticeship. Newsom also added an additional component where every first through 12th grader would get $500 in savings account. If the child is homeless, they would receive another $500 and if foster youth, another $500. It’s an incentive to help kids avoid being saddled with student loan debt, she said.

“Those two programs launched in August,” Ma said. “So, we are going to spend a lot of time and energy getting as many kids to enroll and have their own accounts.”

Ma will continue to work to keep diversity on finance teams that work on the state’s bonds. One way she did that in her first term was to issue smaller deals in order to involve different, and sometimes smaller, banking firms. She said she was hearing that some people weren’t bothering to attempt to work on the state’s large deals.

“In the larger ones, that are one or two billion, we assign certain underwriters in certain slots,” Ma said. “We try to rotate those assignments. We try to be inclusive, and I am conscious of who got the last one. I don’t want (finance) people to give up on working with California. When I started there were some firms who said, ‘We don’t focus on California, because we don’t get assigned.’

“Now everyone has a chance, they are more involved,” Ma said.

The broader pool means more people are working on the state’s bonds, which expands the universe of ideas, she said.

“I feel the underwriter pool is very active and engaged now,” she said.

In the final days leading up to the election, her focus will be on making sure the office continues to run well, and continue to meet with voters, Ma said.