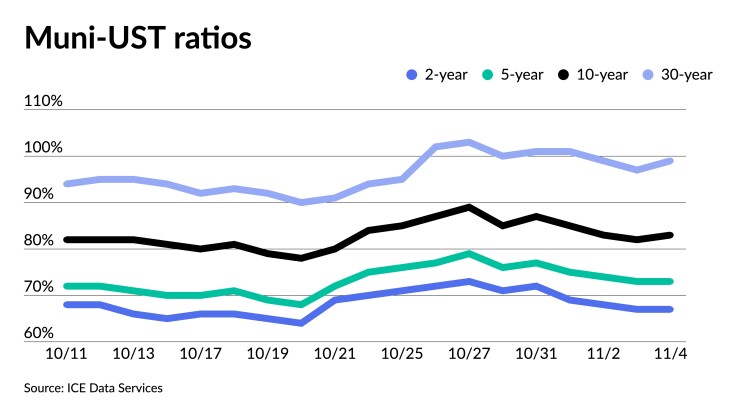 Municipals were little changed Friday as the market shifts its focus to next week’s midterm elections and a larger new-issue calendar.

U.S. Treasuries were weaker out long and equities ended up as markets digested a better-than-expected October jobs report that may validate the Fed’s more hawkish tone on rate hikes this week.

“We suspect that some of this can be explained by the recent underperformance of munis relative to Treasuries as well as by emerging technicals that are likely to have a positive impact upon tax-exempt performance,” Lipton said Friday.

“We continue to believe that we are near the peak in bond rates,” Lipton said. “In our view, current Treasury trading ranges seem to be in the right zip code to account for the most likely restrictive policy scenario.”

Moving forward, Lipton believes that municipals will likely display more pronounced independence from the Treasury market as municipal technicals may soften the volatility brought on by monetary policy.

BofA Global Research strategists noted that for the next few weeks or months, as the Treasury market is entertaining newer high yields, they “would view a muni rally this week as more tactical and thus should be quite limited for the days ahead. Investors should continue to exercise discipline in November and employ hedges if necessary as the selloff may resume soon,” they said.

“These targets should work well if there is no material change in the Fed’s terminal target rate stance,” the report noted.

Midterms in the near term
With the FOMC meeting over, “investor attention will shift to next week’s midterms,” according to Barclays PLC.

“If Republicans gain control of at least one of the congressional chambers, any major policy initiatives that would affect the muni asset class would be unlikely until at least 2024, and market reaction in this scenario would likely be muted, while investor focus would likely shift to the year-end omnibus bill,” said Barclays strategists Mikhail Foux, Clare Pickering and Mayur Patel.

Afterward, they said “investors will look for alleviation of some near-term concerns, and potentially rate stabilization that would help munis perform well for the remainder of the year, although some sectors and credits that greatly benefited from federal help in the past several years (i.e. public transit, healthcare) might actually start to lag.”

When triple-A yields were adjusting higher, underperforming USTs, they said, “it felt for a period of time that tax-exempts had good value relative to USTs.” However, this week “UST yields are moving up again, while munis are outperforming (more so in the front end), and MMD-UST ratios are declining,” Barclays strategists noted.

And although munis are not overly attractive compared to USTs, they said they would not be surprised by some muni outperformance going into 2023.

“Slow issuance is one of the main reasons making us more optimistic, as the visible supply pipeline looks quite subdued especially for taxable bonds, while a number of contested gubernatorial elections also historically put a damper on issuance after mid-terms,” they said.

But “with the election uncertainty out of the way next week, and the Fed seemingly approaching the end of the hiking cycle, some investors might start positioning for 2023,” Barclays strategists said.

They would not be surprised if it happens closer to the end of 2022 rather than sooner. Overall, their general outlook on munis “remains relatively sanguine in the near term.”

Calendar rebounds
Investors will be greeted Monday with a new-issue calendar estimated at $5.268 billion.

There are $4.002 billion of negotiated deals on tap and $1.266 billion on the competitive calendar.

The state of California leads the competitive calendar with $677 million of taxables in two deals.

“Job growth is slowing down but not quickly enough to ease the labor market imbalances that are worrying the Fed,” said Brian Coulton, Fitch chief economist.

Doty said the figure may mean the Fed stays aggressive with rate hikes.

“The Fed will take today’s number as very much a validation of their more hawkish stance that sent markets lower: It’s too soon to talk about a pause and the economy is not showing enough weakness to offset the still-very-elevated inflation prints,” said Jan Szilagyi, CEO of Toggle AI.

Whether that translates to a fifth consecutive 75 basis point increase in the Fed funds target rate likely will depend on upcoming consumer price index and jobs reports, he said.

“Our sense is that the FOMC would prefer to hike by ‘only’ 50 bps in December, but hot economic data could force the Committee’s hand to once again go 75 bps,” said Wells Fargo Securities Senior Economist Sarah House and Economist Michael Pugliese

They doubt today’s data moved the needle much toward a 75 bps hike, and still expect a “50 bps rate hike remains our base case, with next Thursday’s CPI print the next pivotal piece of data.”

Matt Peron, director of research at Janus Henderson Investors, though, disagreed, saying the jobs report was “stronger” than he would like but “probably tame enough to keep the Fed on track to be able slow the pace of rate increases in the coming months.”

From an equity market perspective, he said “a relief rally could be in store as it could have been worse, but we think we are not out of the woods yet as the full impact of policy is yet to be felt, especially on corporate earnings.”

As the economy moved past the bounce-back phase of COVID-19 reopenings, jobs growth was bound to slow,” he said. “Rising interest rates and elevated macroeconomic uncertainty are likely to drag down employment growth later this year and into next,” Leer noted.

“The easing in wage growth might help reduce some inflationary pressure,” said Mortgage Bankers Association VP and Deputy Chief Economist Joel Kan. But he expects the Fed “to continue its current course of policy tightening until there is broader evidence of cooling inflation.”

“However, the Fed has succeeded in hurting wage growth” with the three-month wage growth declining to an annualized rate of just 3.9%,” Doty said. This, he noted, is “tough news for workers considering how much wage growth is lagging inflation.”

He said “Powell should also be pleased that the unemployment rate went up from 3.6% to 3.7%,” as all members of the Fed “want and are expecting unemployment to rise at least a full percentage point.”

The state also is set to sell $549.545 million of taxable general obligation bonds (Bid Group B) at noon Wednesday.

SBF, FTX execs reportedly spend millions on properties in the Bahamas
Ethereum bears have the upper hand according to derivatives data, but for how long?
German property market will slow — but no significant correction ahead, central bank says
Bukele’s government introduced a bill to launch the ‘Bitcoin bonds’
TON, TWT, CHZ and QNT breakout amid traders’ crypto contagion fears