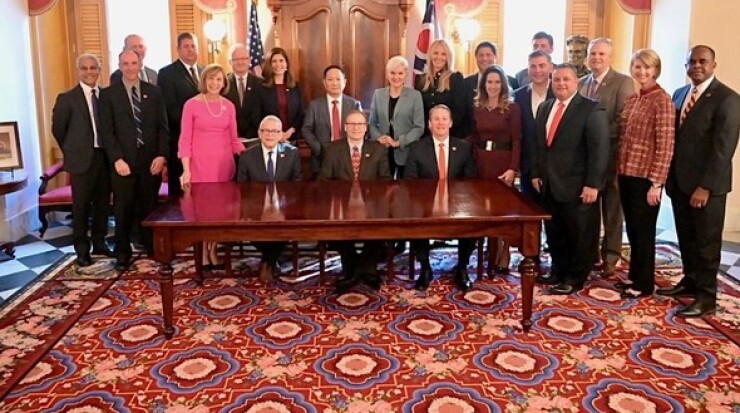 Investors will have a range of state of Ohio-related credits with a mix of taxables, tax-exempts and sustainability-labeled bonds to choose from over the next two weeks with three separate deals hitting the market.

A $617 million taxable JobsOhio transaction is first up Tuesday.

The state established JobsOhio in 2011 as a privatized not-for-profit economic arm and in 2013 transferred its liquor enterprise system under a 25-year lease to JobsOhio Beverage System. The system issued an inaugural $1.5 billion deal in 2013 with much of the proceeds going to the state in exchange for the lease and to pay off existing liquor debt and fund projects.

The state holds a monopoly on the distribution and sale of all liquors with at least 21% alcohol under a model that began after Prohibition ended.

“We feel that the issuance of these bonds is a great opportunity to participate in a resilient high-quality credit,” JobsOhio Chief Financial Officer Brian Faust said in a recorded investor presentation. “The revenue and profit backing that credit is derived from a monopoly.”

Since 2013, the system has nearly doubled operating revenues to $1.73 billion in 2022 from $869 million, which in turn has driven up debt service coverage ratios. A three times ratio will remain intact even after the borrowing.

“The liquor enterprise in Ohio has historically grown at a rate of 3% or more year-over-year and has proven to be resilient to economic and other challenges such as 9/11, the dot-com crash and the Great Recession,” said Julie Battles, JobsOhio senior managing director for finance and administration.

“The rating reflects our expectation that continued liquor profit growth will support growing debt service coverage that over the medium term is maintained at or above 3 times,” said S&P analyst Rob Marker.

The bonds enjoy a first lien on state liquor enterprise profits which come from the sale of spirits. The program pays suppliers directly for spirituous liquor, excluding a $3.38 per gallon tax that is paid to the state treasurer for credit to the general revenue fund. Historic growth in pledged liquor profits has remained strong and resilient through economic cycles, providing $480.6 million in pledged liquor profits for 4.88 times coverage.

Proceeds from the sale will finance approved JobsOhio projects and other economic development efforts. Since 2017, the program has funded 1,500 projects that meet specific criteria. A multi-layered review process contains a clawback mechanism if metrics aren’t reached.

The program has 481 active projects. Recent awards include big-profile projects, like an Intel semiconductor manufacturing plant and Ford and Honda electric production and battery production projects.

Moody’s affirmed the program’s Aa2 rating and positive outlook on the deal and $765 million of outstanding debt as the bonds benefit from a state link. Moody’s moved the state’s outlook on its Aa1 general obligation rating to positive last month.

“The positive outlook is based on growing evidence of new economic development that could diversify the state’s economy, improve growth and strengthen demographic trends over the medium term,” Moody’s said. “The outlook also reflects the recent improvement in the state’s financial position and economic prospects, and our expectation that strong reserves, proactive financial management, and low fixed costs that will support budget flexibility during potential economic uncertainty in the next 18-24 months.”

The bonds are secured by a lien on Title 23 Federal Highway Administration reimbursements to the Ohio Department of Transportation for eligible highway construction projects, but the rating benefits the department’s covenanted pledge to appropriate funds to cover debt from other available resources, such as state gasoline tax receipts, which limits some concern over the potential for future federal funding disruptions. Available funds reached $570 million in fiscal 2022.

Next week, the Ohio Water Development Authority will price $125 million of drinking water assistance fund bonds that will carry a “sustainability” label. Loop Capital Markets is senior manager and RBC Capital Markets is co-senior manager. The program serves as the state revolving fund that makes loans to local borrowers for eligible projects.

The authority is still awaiting updated reviews from Moody’s and S&P, but previous issuance carried top ratings. The program is receiving a $136 million boost in the first year from the federal infrastructure package signed by President Biden last year.

Dappradar Report Shows Blockchain Gaming Thrived Amid FTX Collapse, Sector Accounted for 46% of All Network Activity
Is The Bay Area Housing Market Cooling Off?
Cutting Edge Designers Favor This Countertop Material For More Than Countertops
FTM price rebounds 50% as Fantom reveals 30 years runway (without having to sell its token)
Sunak signals determination for UK to engage with China