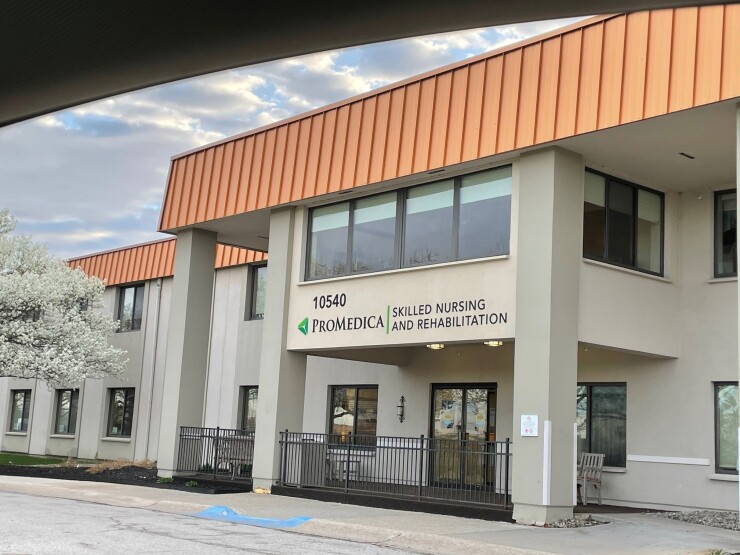 Risks remain, though, S&P said, offering its view in a special bulletin this week following ProMedica’s Monday announcement of the planned transactions.

“We view this strategy as a turning point for the organization in addressing its steep operating losses as well as a high cash burn rate primarily spurred by ongoing challenges in the skilled nursing business,” S&P said in the report authored by primary analyst Anne Cosgrove and secondary analysts Suzie Desai and Stephen Infranco.

ProMedica signed definitive agreements to transfer by Dec. 19 the real estate and management of all of its skilled nursing facilities that are part of a joint venture and master lease between ProMedica and Welltower. A one-time cash payment will be made. No additional financial terms were announced.

“We expect this transaction will result in write offs of certain assets related to the SNF business in the fourth quarter that will contribute to further pressure on various financial covenants, notably the debt-to-capitalization cap of 65% as well as maintenance of liquidity of 60 days’ cash on hand,” S&P said.

The $1.2 billion of debt ProMedica issued in 2018 for the skilled nursing partnership will likely remain as part of ProMedica’s capital structure. “We expect the credit profile will remain in the speculative-grade category given the continued high leverage and relatively low days cash on hand, which provides ProMedica limited cushion under its financial covenants,” S&P said.

S&P currently rates the system BB and has the rating on CreditWatch negative, which it hopes to resolve after reviewing closing documents and not-yet-released September 2022 interim financial statements.

The transfer sheds the operating burden placed on ProMedica’s balance sheet that came from its senior care division, which was especially hit hard by the COVID-19 pandemic, and represents a key step in turnaround efforts.

“By engaging in this transaction, we will be able to increase focus and resources on the other areas of our health system as we continue to provide high-quality, compassionate care and invest in our communities and dedicated caregivers,” Arturo Polizzi, the system’s president and chief executive officer, said in a statement.

ProMedica will retain its non-Welltower leased senior care assisted living centers and some other skilled nursing and memory care facilities as well as its 58 Arden Courts memory care communities within its real estate joint venture with Welltower. ProMedica has a 15% ownership stake in the real estate venture involving those properties.

ProMedica’s ratings began deteriorating before the pandemic in 2018 after taking on more than a billion dollars in debt for the large-scale play into the skilled nursing space through the acquisition of HCR ManorCare. Insurance losses drove more rating cuts before the COVID pandemic led to financial stress at its hospitals and even more in its senior-focused skilled nursing division.

Pandemic-related wounds hit its hospitals like others across the healthcare sector, but they ran deeper for ProMedica due to the scars left on its senior care business. Both operations remain pressured from high labor costs and capacity constraints.

The system has $2.3 billion of bonds and capital leases and $2.6 billion in operating lease obligations.

S&P cut the rating to BB from BBB-minus Aug. 9 and placed the rating on CreditWatch with negative implications.

The S&P downgrade triggered a covenant violation and a non-payment related default under 2018 standby letters of credit that would allow the financial institutions to accelerate all of the obligations, but the system reported in a Sept. 9 filing it had received some breathing room through waivers from its standby letter of credit providers.

Moody’s dropped the rating two notches to Ba2 from Baa3 in September and warned of further deterioration by leaving the system under review for a further downgrade due to material cash-flow losses this year. “The provider business will need to reverse the year-to-date cash-flow loss following solid margins in fiscal 2021,” Moody’s said.

The challenges are partly offset by the system’s cash position of $1.4 billion and the potential value of other assets.

Fitch Ratings in May dropped ProMedica’s rating to junk, downgrading it to BB-plus from BBB-minus and assigning a negative outlook.

ProMedica owns and operates 11 acute care hospitals in Ohio and Michigan; a health insurance company including a dental plan with nearly 390,000 members; and its senior care business operates in 26 states. System revenues totaled $6.9 billion in fiscal 2021.