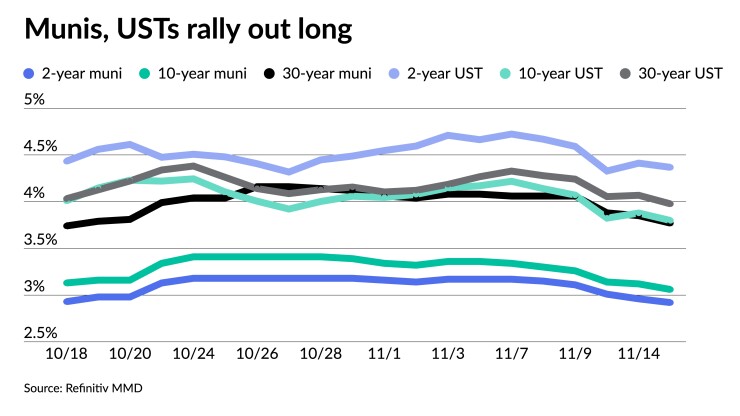 Municipals were firmer Tuesday as triple-A yields moved along with U.S. Treasuries to rally out long on a smaller-than-expected increase in producer prices. Equities closed the session in the black.

The U.S. Producer Price Index for final demand rose 0.2% month-over-month in October, lowering the year-over-year increase to 8%, “underpinned by relatively broad-based moderations of inflationary pressures within the goods sector and by margin compression,” said Scott Anderson, chief economist and executive vice president at Bank of the West Economics.

They noted that strong interest in tax-exempts continues at current high yields.

“However, we expect continued volatility in munis through the end of the year due to an outsized amount of tax-loss trading,” they said.

Ongoing outflows from the mutual funds are “leaving a base of smaller and more cautious buyers,” said Matt Fabian, a partner at Municipal Market Analytics.

Not all buyers have been cautious as municipal exchanged-traded funds have seen major inflows in the last few weeks, and seasonal expectations will turn very positive with December, he said.

A little caution is seen in the “SIFMA 7-day index’s reset to a lower yield, which itself represents just 58% of SOFR; this is likely a function of tight 2a7 supply conditions but suggests a material repricing risk at the front end nonetheless,” Fabian said.

2023 will improve for fixed-income
Morgan Stanley strategists Mark T. Schmidt and Barbara A. Boakye said next year will be a good year for fixed-income across the board, including munis.

“Slowing inflation and a soft landing for growth could create a Goldilocks environment for fixed income,” they said.

For the first time in years, Morgan Stanley strategists said “households could net increase their exposure to bonds.”

They expect 8% total returns for the index as a whole, while out long, they see “double-digit total returns and 30bp of spread compression.”

“With a flat curve denting the benefits of leverage, for funds there may be few alternatives as attractive as adding credit,” possibly encouraging “more funds to add credit exposure for fear of missing out,” they said.

Muni CUSIP requests increase
Municipal request volume increased in October, following a decrease in September, according to CUSIP Global Services. For muni bonds specifically, there was an increase of 4.1% month-over-month but a 24.4% decrease year-over-year.

The aggregate total of identifier requests for new municipal securities, including municipal bonds, long-term and short-term notes, and commercial paper, rose 3.6% versus September totals. On a year-over-year basis, overall municipal volumes were down 21.0%.

“The mix of easing intermediate and raw input prices, normalization in transportation and shipping costs, and slowing nominal compensation growth point to softer pipeline inflationary pressures in the month ahead,” he added.

“While the Fed may take solace in durable goods deflation, the uptick in short and long-run measures of consumer inflation expectations in the latest survey data provided by the University of Michigan and the Federal Reserve Bank of New York in response to increases in prices for ‘salient’ goods like food and gasoline suggest the Fed cannot be complacent,” he said.

“The Fed is still likely to raise rates by 50 basis points in the December meeting as the Fed has demonstrated that it has no ability whatsoever to forecast inflation,” said Jay Hatfield, CEO at Infrastructure Capital Advisors and portfolio manager of the InfraCap Equity Income ETF.

Hatfield noted, “the Fed ignores forward-looking indicators of inflation including an unprecedented decline in the money supply and a decline in energy prices of almost 50%.”

He added, “The Fed is in the process of making yet another policy mistake by continuing to raise rates even when policy is extremely tight and inflation steadily declining, which is likely to cause a mild recession in the U.S. and a major recession in Europe.”

The Dormitory Authority of the State of New York (A1///) is set to price Thursday $114.975 million of Rochester Institute of Technology revenue bonds, Series 2022A, serials 2028-2042. RBC Capital Markets.