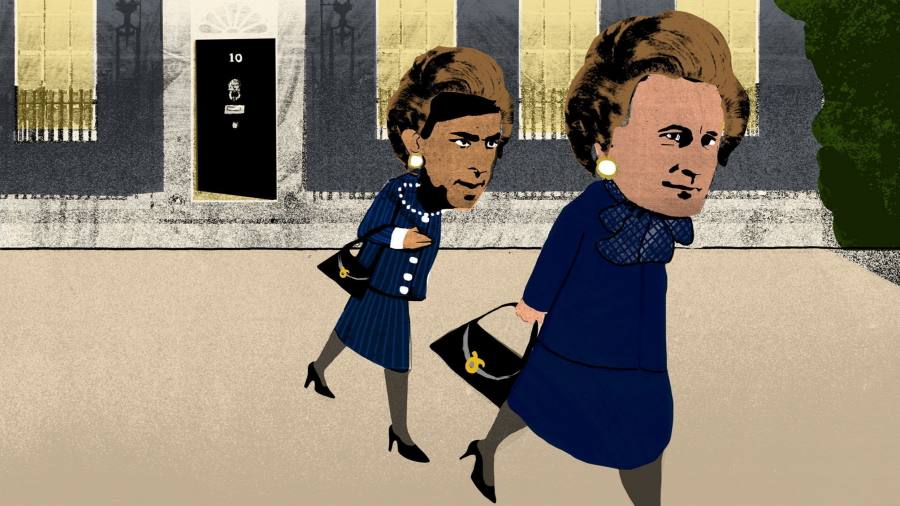 The Conservative party has been imitating itself for so long that it can no longer tell the original from the pastiche. A party of powerful instincts seems, at times, reduced to a Margaret Thatcher tribute act mechanically churning out greatest hits and imagining that history began in 1979.

Sometimes this Great British Take-Off sees its leaders trying to echo Thatcher — or more often what they like to think she thought. Sometimes it is the Powellite Conservatism of Nigel Farage or the obsessions of the rightwing media. Earlier policies are given the status of sacred texts and heresies denounced. From Europe to the environment to the size of the state, MPs and outriders argue not over whether a policy is right or wrong, but whether it is “unconservative”.

The latest skirmish, over tax rises, will dominate Conservative debate for weeks following Jeremy Hunt’s fiscal statement on Thursday. After the fiasco of Liz Truss and Kwasi Kwarteng’s “mini” Budget, it is accepted that restoring sound public finances and market credibility is the overwhelming priority even in the face of recession.

But the uneasy truce Rishi Sunak enjoys with his party may not last. Tories remain fixated by a tax burden which, post-pandemic, has risen to levels unseen since the 1950s. This is one reason why spending cuts will still take more of the strain than Hunt initially envisaged (though much will be backloaded till after the next election). Even so, he will raise taxes and freeze allowances, relying on the stealth of fiscal drag to pull millions into a higher tax bracket. Memories of the Truss tax experiment will quell immediate revolts but some on the party right are already raging against those they brand as TINOs (Tories in name only).

At the heart of this is the dogma of faux Thatcherism, which holds that the Tories’ central mission is to be the party of low tax and a small state. This view is fortified by the sense that the party has lost many of its other dependable electoral differentiators. Yet since taxes will remain high by UK standards, it is unrealistic. Beyond that, it is the wrong strategic priority.

The Conservatives do not need to be the low tax party; they have only to be the lower tax party. It is necessary only that people believe that whatever the economic circumstances, taxes would be higher under Labour.

The good news for the Tories is that people generally do think this: the party enjoys a brand recognition which associates it with careful spending and lower taxes. And they can set a trap for Labour. Having set out savings beyond the election they will challenge the opposition to accept the cuts or say how their reversal would be funded.

There is real worth in a political party whose instincts veer towards lower taxes and a smaller state. The drift of government is always to do more, to find new ways to spend public money. This can only be arrested by a party which persistently asks why a job can’t be done by the private sector or a responsibility left to the individual. But there is a difference between an instinct and an ideology. Asking these important questions is not the same as insisting that there can only ever be one answer.

Thatcher herself had significant tax-cutting instincts, and yet the tax burden did not fall meaningfully until halfway through her premiership (it rose in her early years) because she understood that policy could not be divorced from circumstances. The core mission is not to get the tax burden or public spending below a certain figure. It is good governance. This is where the current Conservative debate has gone wrong, elevating aspirations into doctrine.

The low tax battle is not even the one that Conservatives need to win now. For one thing, it is clear that the public understands the need for higher spending. People can see that the country has been hammered by two external shocks (three if you add Brexit to Covid-19 and the energy crisis). They know that furlough and energy support schemes must be paid for. Voters see public services in a state of collapse and infrastructure needing upgrades. They bought into the idea of investment for future growth. Last year’s British Social Attitudes survey showed just 6 per cent of those polled wanted tax cuts at the expense of key services. A full 52 per cent wanted tax raised.

The argument the Tories actually need to win is that they still deserve to be trusted on managing the economy, tackling inflation and protecting public services. This will be painful but fiscal discipline is comfortable territory for them. Beyond that, they need a plan to tackle the UK’s anaemic economic growth, which Truss rightly identified as the underlying challenge. Without it, there is no low tax path which meets public demands.

It is not clear that the next election will be determined by tax rates. It is more likely to be fought on the state of public services and who is best placed to propel any nascent recovery. After 12 years, an overlong dose of austerity, Brexit, stagnant living standards and the political chaos of the past year, it may simply be that time is running out for the Conservatives.

The Tories do not need to rebuild their tax-cutting image. They need to regain a reputation for competent stewardship and offer hope for rising living standards. Obsessing about an ideologically acceptable tax ratio is missing the point, for themselves and, more importantly, for the country.

Why You Might Want Kitchen Composting Convenience
TON, TWT, CHZ and QNT breakout amid traders’ crypto contagion fears
$15.5K retest is more likely, according to Bitcoin futures and options
Bukele’s government introduced a bill to launch the ‘Bitcoin bonds’
Report: Luno Africa Says Customers and Operations Not Affected by Turmoil at Genesis Capital