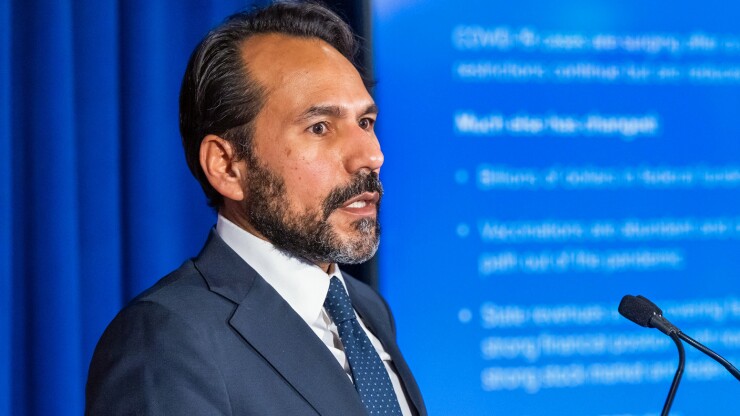 Putting “Puerto Rico on the path towards economic progress” was Mujica’s motivation for taking the position, he said. “I support [the Oversight Board’s] mission to transform Puerto Rico’s recovery into prosperity.”

Mujica “has the skills, the experience, and the passion to continue the Oversight Board’s work helping Puerto Rico to achieve long-term fiscal responsibility and implement the reforms necessary to create a solid foundation for sustainable economic growth,” said Board Chairman David Skeel.

In his role with New York, Mujica needed “to reach consensus among many stakeholders with diverse interests,” Skeel said. “Those skills will now assist the Puerto Rico government to deliver services more efficiently, and for the people of Puerto Rico to prosper.”

Puerto Rico “is a special place,” Mujica said, where his grandparents live and his parents were born. “I want to see it prosper.”

By employing the same dedication to “fiscal responsibility, budgetary stability, transparency, and economic growth” as in New York, he said, “Puerto Rico can succeed.”

Mujica previously served as chief of staff to the temporary president and majority leaders of the state Senate and as secretary to the New York Senate Finance Committee. He has also served on the governing boards of the Metropolitan Transportation Authority and Affordable Housing Corporation and as a trustee of The City University of New York.

The Oversight Board’s next goal is “achieving long-term fiscal responsibility as the foundation for sustainable economic growth,” Skeel said, which will require determining priorities.

“As our executive director, Robert will be a critical voice in helping to define those priorities and the path to a better future for the residents of Puerto Rico,” Skeel said.

Mujica’s background helping manage New York State’s debt portfolio “is a plus,” said Puerto Rico Clearinghouse Principal Cate Long. “Puerto Rico’s restructured debt trades as junk, they continue to be behind in filing audited financial statements, and their documentation filed at EMMA is a shambles.”

Although retail investors may feel burned by Puerto Rico’s bankruptcy, Long said, “If Mr. Mujica is successful in helping the government address reporting issues there is more likelihood the territory can regain market access ‘at reasonable rates.'”

The board has long advocated consolidating government agencies, which hasn’t happened, Long said, but “perhaps with a new executive director the board will make this a priority.”

Mujica succeeds Natalie Jaresko as Oversight Board executive director. Jarekso started in the position in March 2017, about a half year after the federal government formed the board. She gave notice in early February and left at the end of March.

Fantom wants to cut token burn rate by 75% to fund DApp rewards program
The future of smart contract adoption for enterprises
Is Bitcoin the only crypto that will survive FTX? Interview with Bitcoin maximalist
Addresses That Sat Idle for Years Transferred 1,221 Bitcoins Worth $20M Over the Last 4 Days
ApeCoin risks 30% crash after APE staking debut in December