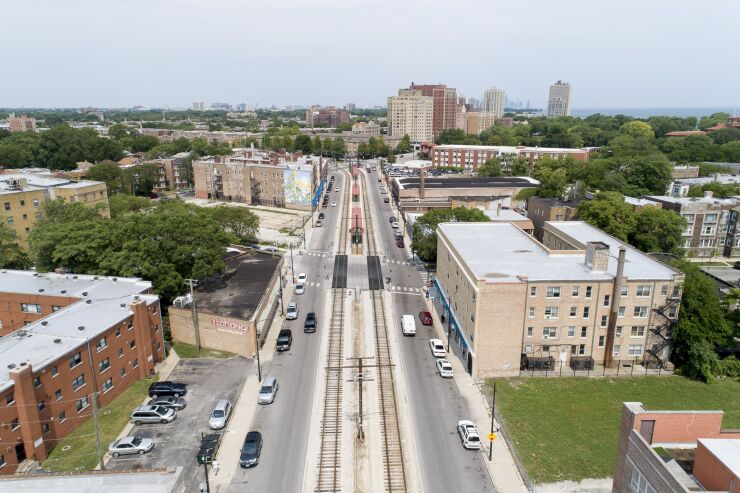 Chicago’s inaugural environmental, social, and governance-oriented bond will carry a “social” label and sell under its higher-rated Sales Tax Securitization Corp. credit to widen appeal for retail investors — especially those with a local address.

The city first discussed its ESG plans in June and, while still finalizing the size, expects to sell roughly $150 million. Kestrel Verifiers will provide the third party opinion that it complies with social bond principles.

The bonds will sell in tandem with a roughly $750 million general obligation issue in early December buoyed by a round of positive rating news, notably a Moody’s Investors Service upgrade that lifted the GO rating out from junk status where it had been since 2015.

The city expects both the ratings upswing and the social bond piece to draw new investors to the table which in turn will help keep interest rates down, no easy task given market tumult and uncertainty over whether mutual fund outflows will continue to pressure the municipal market.

“They are called ‘social’ bonds but they will also have green impacts,” Chicago Chief Financial Officer Jennie Huang Bennett said in an interview after a speech about the city’s fiscal progress at the Chicago City Club Monday. “We’ve really targeted specific projects within the Chicago Recovery Plan where we can really identify impacts in a quantifiable way for investors.”

“We’ve talked to some of the top ESG bondholders across the country and in our conversation with them one of the number one things they identify was important to them was being able to identify impact so they can tell their portfolio holders” that the investment is accomplishing such aims as a reduction in the carbon footprint or creating jobs or affordable housing, Bennett said.

The social bonds are being structured to appeal to retail with a specific eye on local investors. With that aim in mind, the city opted to sell the bonds under its double-A rated STSC credit, a bankruptcy-remote special entity. “We felt like it was a better vehicle for being able to generate retail distribution,” Bennett said.

The sale is slated for early December. UBS and RBC Capital Markets are leading the syndicate on the sale.

Bennett said the city intends to conduct a “full court press” to highlight the upgrades and the city’s argument that it’s reached a point of fiscal stability that better positions it to manage a potential recession with $1.1 billion in reserves and its budget more structurally aligned.

“Getting the upgrade to investment grade across the board is a significant benefit to the city by way of the number of investors who can really only invest in investment grade,” so “we do expect for more participation and a reduction in our credit spreads,” Bennett said.

Wider appeal will benefit the city as will a scarcity of paper.

While the single Moody’s junk rating might not necessarily have barred mutual funds from holding the paper, the cut to junk still spooked some buyers who didn’t want to take on liquidity and credit risks, said Vikram Rai, head of municipal strategy at Citibank.

”Moody’s upgrade has the effect of undoing the damage inflicted by the downgrade,” Rai said. “I would think that this will expand the buyer base so that should give the bonds a boost.”

Chicago bonds don’t trade often so the deal will provide fresh pricing discovery that will set the tone for future secondary trading, which is currently around 200 basis points to the AAA benchmark for the city’s GOs. STSC bonds trade about 100 bps narrower, Rai said.

With interest rates on a steady march upward, spreads have widened sharply from the city’s last December sale when the 10-year yield on its GO saw a 61 basis point spread to the MMD AAA benchmark. It’s currently evaluated at 233 bps. The 10-year STSC bond in 2021 saw a 39 bp spread and is currently evaluated at 111 bps, according to Refinitiv MMD.

If outflows ebb, Chicago benefits because a “rising tide lifts all boats and Chicago is a large boat,” Rai said, adding that Chicago will receive “an unconditional lift” because of the upgrade and a “conditional” boost that’s dependent on market technicals.

Rai recommends to investors short to intermediate maturities across the market given the economic clouds that loom with too little pricing reward on the long end of the curve to warrant the duration risk.

The decision unveiled this fall to begin sending supplemental contributions to the pension system to stave off further growth in the $33.7 billion net liability tab with weak funded ratios drove the Moody’s upgrade. The city will send an extra $242 million payment in 2023.

Chicago has not asked Moody’s for a GO rating since it was cut to junk in 2015 but will seek one on the upcoming GO sale.

Fitch also raised the STSC sales tax securitization bond rating to AA from AA-minus. The rating is capped at six notches above the city’s GO/issuer credit rating. S&P affirmed the AA-minus rating and moved the outlook to positive in tandem with the GO outlook. The rating is capped at that level due to links to the city as obligor. Kroll late last month affirmed the STSC bonds at AA-plus and stable.