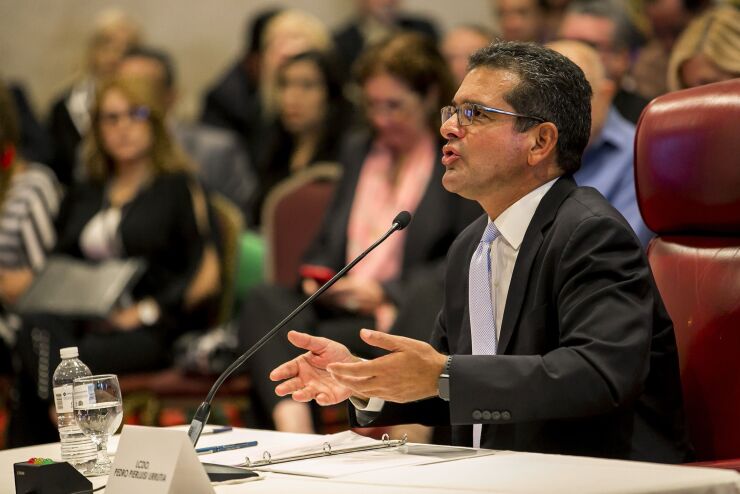 Puerto Rico Gov. Pedro Pierluisi told House lawmakers Thursday it would be a “nightmare” to unwind LUMA Energy’s contract to provide electricity to the island despite widespread blackouts over the past year.

“Nobody should expect that I will allow – if I can help it – for a major disruption of our system just because some people don’t like the P3 process,” Pierluisi said.

The move would disrupt services to 1.5 million people and delay the “transformation and reconstruction” of the island’s troubled transmission and distribution system, he said.

On top of that, the 2018 law that enabled the LUMA contract would “require I start a new P3 process to substitute LUMA – to me that’s out of the question,” Pierluisi said. “Canceling that contract to me is a nightmare.”

The comments came during a House Natural Resources Committee hearing on the reconstruction and recovery of Puerto Rico’s energy system in the wake of Hurricanes Maria and Fiona. LUMA officials also testified.

LUMA is responsible for the island’s electricity transmission and distribution, though not generation.

Since taking over in June 2021, its performance has sparked widespread criticism from island residents and others, including Resident Commissioner Jenniffer González Colón, Puerto Rico’s non-voting representative in the House, who questioned LUMA officials on their profits during the hearing.

“The biggest challenge facing Puerto Rico is the unstable condition of the grids,” said González Colón.

LUMA’s performance could impact the five-year-old bankruptcy of the Puerto Rico Electric Power Authority, which faces a Dec. 1 deadline to submit a proposed plan of adjustment.

Under questioning from Rep. Nydia M. Velázquez, D-N.Y., about whether bondholders are going to see a “windfall” from a settlement, Pierluisi indicated that negotiations may extend past the deadline.

The oversight board and the government are “doing their best to reach a consensual agreement,” he said. “I can’t rule out there will be settlement negotiations along the way but I’m not going to allow PREPA to end up with a debt burden that’s going to cause extraordinary increases in the cost of electricity for the people.”

By Dec. 1, LUMA can continue to serve under its current temporary agreement or under the original 15-year contract, Pierluisi said.

LUMA has estimated hurricane-related damage to the transmission and distribution grid could be as high as $4 billion, Pierluisi said. The generation facilities, which are operated by PREPA, also suffered damage but “the amount of the damage doesn’t reach the number that LUMA estimated.”

Under questioning from lawmakers, Pierluisi said LUMA is being closely watched by several government bodies.

“There’s oversight from so many quarters,” he said, including the governor’s office, the P3 authority, and the legislature among others. “If anything, there’s oversight all over the place.”

LUMA Energy officials defended their performance and said they inherited a massive deferred maintenance backlog and that they face penalties if they don’t meet certain benchmarks. The company earns $100 million in annual fees under the current contract, and last year saw a profit, an official said under questioning from González Colón.

The governor largely blamed red tape at the Federal Emergency Management Agency and said disbursement had improved significantly in the last year.

FEMA’s recent decision to advance 50% of the cost of projects to the island is a “gamechanger,” he said. “I envision a very busy 2023 with thousands of construction projects on the way.”