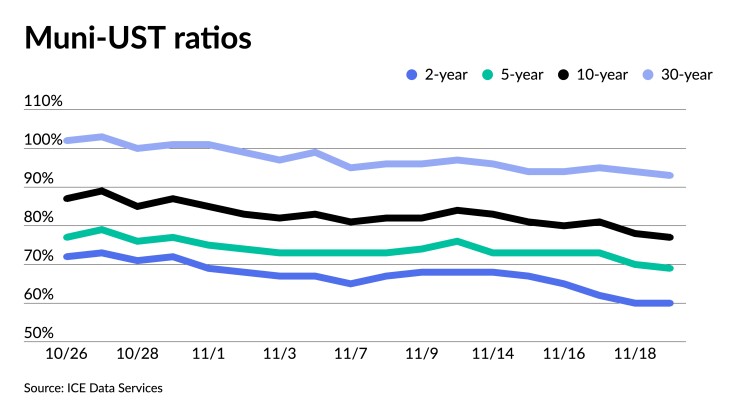 Municipals were little changed in light trading Monday as a holiday-shortened week with lackluster supply kept it steady for the asset class, while U.S. Treasuries were mixed and equities ended down.

The negotiated calendar this week is very light due to the Thanksgiving holiday, with only four deals above $100 million.

Comparatively, last week’s negotiated calendar totaled about $6.8 billion “with many issuers deciding to issue before the Thanksgiving holiday week and capitalize on the markets improving over the last few weeks as many investors are coming back buying,” said Jason Wong, vice president of municipals AmeriVet Securities.

Trading for last week totaled around $54.36 billion for the week as secondary trading levels continued to be elevated, he said.

With better-than-expected inflation numbers two weeks prior, he said “many investors started to come back to the markets as they saw this as a sign that the Fed policies to lower inflation seems to be working.”

But while markets are improving, Wong said customers bids-wanted remain at elevated levels, with clients putting up roughly $8.64 billion for the bid last week.

Munis had one of their best weeks last week since July with yields falling on “10-year notes by 26.2 basis points to 2.899%,” according to Wong. This is the first time in around two months the 10-year triple-A benchmark yield has fallen below 3%.

With the sharp drop in yields, muni-USTs ratios fall as 10-year ratios yield 76% Friday compared to 82% from the prior week.

With the short end becoming expensive compared to USTs, Wong said “many investors have started to move further down the curve and it has been starting to show as ratios further out have come down.”

For the first time since August, mutual funds saw inflows. Investors added about $605 million into mutual funds for the week ending Wednesday, per Refinitiv Lipper, ending a 14-week streak of outflows. This is a “positive sign as investors are starting to have positive sentiment towards Fed policies aimed combating high inflation,” he said.

Investors have pulled about $72.9 billion from muni bond funds year-to-date, per Lipper, “as a series of rate hikes by the Federal Reserve have sent yields climbing and investors to the sidelines,” he said but noted, “better-than-expected inflation data has sparked a comeback into the muni market.”

However, they said, demand has been strong.

New issues have been priced well, net flows into exchange-traded funds have been steady and an improved willingness to take on duration is emerging, they said.

“If the current appetite for bonds continues, the end of the year slowdown in the primary market will bias prices higher,” they said.

With over half of November over, Wong said the muni bond market is posting one of its best months of the year as the muni market has returned about 3.66% month-to-date and is on pace to beat USTs for the second consecutive month.

Despite this, 2022 is still on pace to have the worst year in decades as muni year-to-date returns are now at 9.67%.

“If we continue to see inflation come down as well yields finally stabilize, we could see some positive returns for the last six weeks of the year and some positive flows going into 2023,” Wong said.