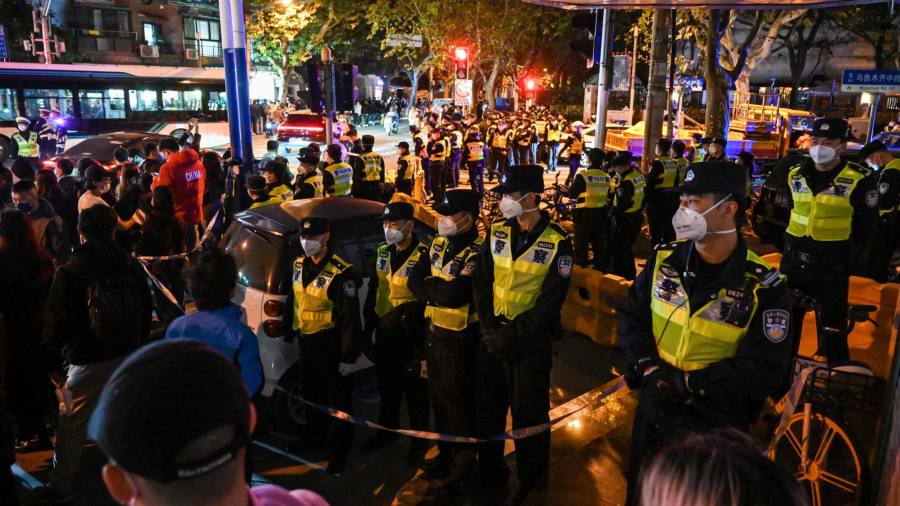 Protests in Shanghai escalated on Sunday evening as police struggled to disperse large crowds who gathered in the city, part of a nationwide movement that poses one of the most brazen challenges to the Chinese Communist party’s authority in decades.

The unrest began on Saturday night and centred on a road named after the Chinese city of Urumqi, where a deadly fire on Thursday killed ten people. That incident, in the northwestern Xinjiang region, fuelled social media outrage and prompted a series of vigils around the country, as people blamed coronavirus restrictions for the tragedy — allegations that the authorities denied.

After clearing the protest in the early hours of Sunday morning, crowds returned in the afternoon. People continued to gather through the evening, occasionally clashing with police and shouting anti-government slogans. Similar clashes occurred in Xinjiang on Friday, while students across the country held rallies over the weekend, including one on Sunday at the elite Tsinghua University in Beijing.

The CCP has had to contend with much larger demonstrations over recent years, in particular the mass pro-democracy protests in Hong Kong in 2019 that brought millions of people on to the territory’s streets.

But in terms of its national scope and direct challenge to party authority, the gathering movement against President Xi Jinping’s signature zero-Covid policy is unprecedented since the 1989 Tiananmen Square protests. People at Saturday’s Shanghai protest chanted openly for the party and Xi to “step down”.

“The protests reached a new point over the weekend, particularly with slogans asking for Xi to stand down appearing. Previously, they were about local implementation [of zero-Covid],” said Steve Tsang, head of the Soas China Institute at the University of London.

“I think [Xi] will turn to repression of some form to stamp out further protests against the policy and his leadership,” Tsang added. “Abandoning zero-Covid now would be too embarrassing and a sign of weakness.”

Under Xi’s zero-Covid approach to pandemic management, authorities have sought to eliminate the virus through frequent lockdowns. Shanghai was closed for more than two months in the spring. State media outlets said over the weekend that the government would continue to put “people and lives first” and “would not waver” from its approach.

Some protesters in Shanghai on Sunday held up blank pieces of paper to symbolise censorship — a gesture also used by pro-democracy activists in Hong Kong — and pinned them to trees before police ripped them down. Others carried white flowers, a symbol of mourning in Chinese culture.

“For the past three years, people have accumulated this kind of anger,” said one of those at the protest who asked to remain anonymous.

A student who rushed to attend the Shanghai protest on Saturday after seeing it online, said: “I know what I’m doing is very dangerous, but it’s my duty.” Another said the event began as a peaceful commemoration of the people who died in the Urumqi fire, but got “out of control”.

Some people gathered at the site complained about a lack of freedom and what they said was the unscientific nature of China’s Covid policies, which aim to eliminate the virus through mass testing, quarantine and lockdowns.

The policy is coming under immense pressure from rising cases, popular discontent and a slowing economy. Authorities on Sunday reported the highest number of daily infections on record for the fourth consecutive day, with the tally close to 40,000.

Elsewhere on Chinese social media, footage of protests — initially of groups of people in Urumqi from Friday night, but subsequently of those across the country — circulated widely but were also censored.

Videos showed students gathering at a vigil at the Communication University of China, Nanjing, while images also emerged of a similar vigil at a university in Wuhan.

Images circulated of graffiti at Peking University including slogans such as “we don’t want PCR tests, we want food”.

Sheena Chestnut Greitens, a China expert at the American Enterprise Institute, said the widespread unrest could “become a serious test of the tools of social control developed under Xi”.

The Chinese authorities are grappling with coronavirus outbreaks in many large cities, including Guangzhou and Beijing. Previous outbreaks have been successfully suppressed, but they were typically centred in one city or region, such as in Shanghai and the Yangtze river delta early this year.

In Beijing, where restrictions have been tightened in recent days but authorities have stopped short of a full citywide lockdown, some residents confronted officials over the closure of their compounds.

There were signs that people were drawing on the protests to counter such restrictions elsewhere in China. One resident in the city of Shenzhen told the Financial Times that the demonstrations since Friday had provided “inspiration”, after peaceful negotiations with officials to lift a lockdown of their compound had failed.

He said he and his neighbours gathered at the gates and shouted “set us free”, after which the local officials relented. “We were copying and pasting what Beijing and Urumqi residents did and it worked,” he said.

Nadhim Zahawi sacked as Tory party chair over his tax affairs
Beyoncé, a $100k-a-night suite and a red carpet of influencers: Dubai basks in its booming economy
What is a ‘rolling recession’ and how does it affect consumers? Economic experts explain
Mega-mergers stand out amid a 2022 dip in hospital consolidation
New York AG will seek sanctions on Trump, lawyers over ‘false’ court filings in fraud suit