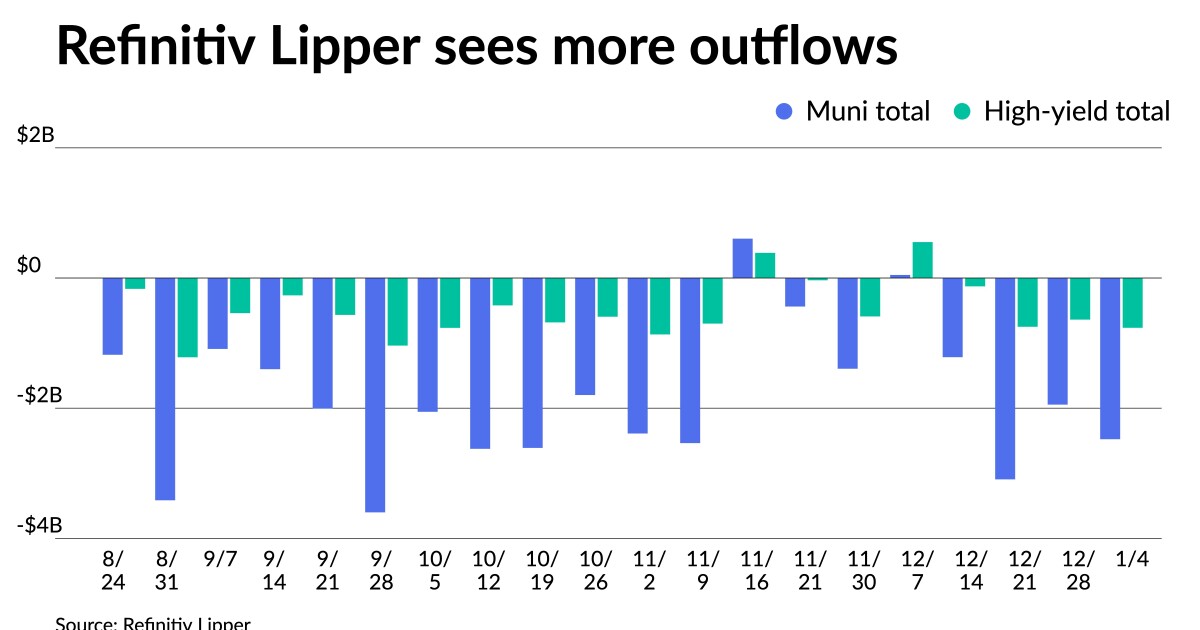 Municipals were mixed Thursday in the secondary market as a $765 million deal from the Triborough Bridge and Tunnel Authority took focus in the primary. U.S. Treasuries were weaker 10 years and in, and equities ended lower.

January is an interesting month for the municipal bond market because of potential stickiness in prices, said Matt Fabian, a partner at Municipal Market Analytics.

“Yields and supply are more than sufficient to keep attracting interest; the torturous negative price trend of 2022 has softened/stabilized; the Fed is likely to prevent yields from falling by too much too fast; and tax-exempt supply seems likely to remain modest at best,” he said.

Conversely, “January reinvestment demand is meaningfully less than last year; mutual fund outflows accelerated into year end, suggesting that [Jan. 1] may not bring the fast turn in demand that many investors have anticipated; and an uptick in COVID hospitalizations via the new XBB.1.5 variant, not to mention a potential new wave from the end of China’s zero COVID policy, paints all expected outcomes with a new layer of uncertainty,” Fabian noted.

While yields remain attractive, investors’ level of “skittishness may be the prevailing performance determinant in the next week,” he said.

“Performance for the first month of 2023 begins from a good place, and longer-term muni technicals coupled with a resilient credit outlook would likely bring active buyer interest from SMAs, ETFs and mutual funds through much of 2023,” he said.

This year should be approached “with guarded optimism” since investor “sentiment can easily be swayed, especially if the technical dynamic loses its momentum,” Lipton said.

Outflows continued as Refinitiv Lipper reported $2.477 billion was pulled from municipal bond mutual funds in the week ending Wednesday after $1.946 billion of outflows the week prior.

Lipton expects “a break in the extended period of record mutual fund outflows as technicals return to the performance driver’s seat and monetary policy mayhem dissipates in a meaningful way.

“Of course, there will be the usual muni movement in lockstep with UST, but we can expect to see some social distancing as conditions guide tax-exempts to outperform in 2023,” he said.

Part of the more recent outflow activity, Lipton noted, can be “ascribed to year-end tax loss harvesting and now that this activity has reached a cyclical conclusion, pure market technicals should eventually be a driving force for lighter outflows and even an extended period of positive flows.”

As demand rises and supply remains “sparse,” he said “investors can take advantage of the yield and income attributes now being offered by the muni asset class,” he said.

A shift in flow patterns may not be seen in the first few weeks of the new year, but Lipton expects “to see more intermittent inflows with possibly an enduring string of positive flows later in the year.”

Deposits into muni ETFs were outliers in 2022, and continued allocations into muni ETFs are expected to accelerate in 2023 “as this relatively young investment vehicle continues to offer attractive benefits and is seen as a viable place to allocate cash,” he said.

“Early-in-the-year reinvestment needs and expectations for a moderate year-over-year advance in issuance will help to support the technical narrative as supply is simply not holding pace with demand,” Lipton said. “December and January are typically lighter issuance months and this pattern should match well with an ample amount of sidelined cash that is awaiting investment guidance.”

Supply is also a big consideration for the muni market in 2023.

“Volume trends throughout 2022 were heavily influenced by some unique considerations that shifted issuer sentiment,” according to Lipton.

For much of past year, “monetary policy uncertainty and a general rise in interest rates kept issuers out of the market and even last November’s mid-term election cycle, with so many local contests, had moved issuers to hit the pause button,” he said.

“Many issuers in need of immediate financing for infrastructure development and general capital projects found themselves in need of market access,” Lipton said. “Other issuers had effectively closed their books on 2022 sooner than usual.”

With expectations for higher interest rates through the first half of 2023, he is “forecasting a modest increase in taxable volume,” believing “taxable issuance will stay low with limited taxable advance refunding eligibility as Treasury yields are likely to remain elevated given continued Fed tightening and a still-resilient economy.”

Relative value ratios moved away from “their proximity to historically tight levels in 2022 as long munis in particular grew cheaper to offer more compelling opportunities to crossover buyers,” Lipton noted.

In 2022, the yield curve inverted in the muni market following overly rich valuations on display for ultra-short tenors.

“As ratios return to their longer-term averages that are much closer to 100%, cheaper valuations with wider spread may enhance performance potential, yet technicals could directionally influence ratios,” he said.

Treasuries were weaker 10 years and in.

Given the Fed’s acknowledge progress in bringing rates toward restrictive levels, Levy and Ghzalah said, “the Fed is opting to move in smaller steps to monitor how the cumulative effects of its rate hikes are impacting economic activity and inflation.”

The focus will be on the labor market, watching “for signs of cooling labor demand and easing compensation growth,” according to Levy and Ghzalah.

Now that the Fed has slowed the pace of increases, Morgan Stanley strategists said, “the question now is where is the peak rate and how long will the Fed hold rates at peak.”

The Fed should raise rates above 5% and keep them there well into 2024, said Federal Reserve Bank of Kansas City President Esther George early Thursday.

But the minutes suggested the FOMC is maintaining its optionality, “giving no hints as to future policy decisions,” the Morgan Stanley strategists said.

The FOMC maintains “inflation remains unacceptably high and participants expect that a sustained period of below-trend real GDP growth will be needed to reduce inflationary pressures,” they said.

Ahead of the December meeting, they said “there were two promising inflation prints, but not enough for participants to feel confident that inflation is on the right path.”