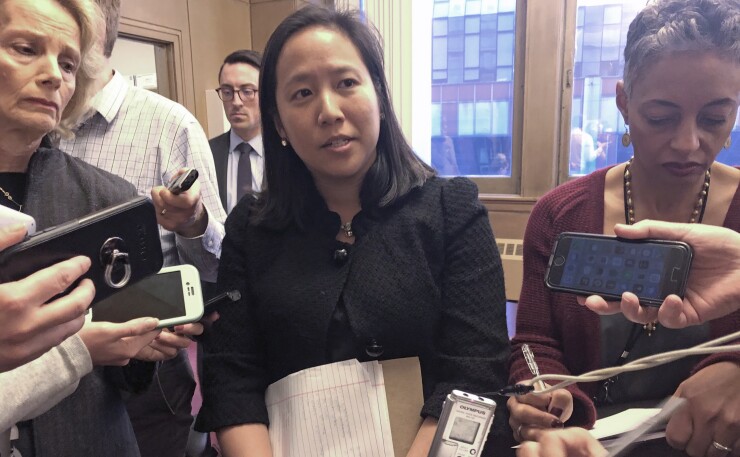 Chicago sent a $242 million supplemental payment to its pension systems, making good on a funding policy adopted as part of the 2023 budget that helped lift its one junk rating back into investment-grade territory.

Efforts to better align expenses with recurring revenues, shed one-time maneuvers like scoop-and-toss debt restructuring, and complete a move to an actuarially based pension payment begun under former Mayor Rahm Emanuel and continued by Mayor Lori Lightfoot provided the underpinning for a series of positive rating actions last fall.

But it was the administration’s move to tap surplus revenues to make the additional $242 million payment — the amount needed to stave off growth of the legacy unfunded tab — and a plan to continue that funding policy in future years that cemented the upgrade to Baa3 from Ba1 from Moody’s Investors Service.

The city made the payment Tuesday.

“We are not only making the minimum payment on our pension credit card, but we’re now paying down the outstanding balance,” said Jennie Huang Bennett, the city’s chief financial officer. “As a result, the city will save approximately $3 billion in future pension contributions through reduced actuarial interest and improved investment earnings.”

With a roughly $2.3 billion contribution to its four pension funds last year, the city reached a milestone putting all four funds on a path to 90% funding between 2055 and 2058. Funded ratios improved slightly but remain weak, in a range between 21% and 46%. Pension contributions will rise this year to nearly $2.7 billion when including the $242 million supplemental contribution.

The pension funding overhaul that followed eliminated cuts, and bases contributions on actuarially assumptions, but the formula still falls short of recommended actuarial standards, so it takes years to overcome the tread-water mark where the legacy tab is paid down.

That leaves the funds vulnerable in years when investment returns fall short of assumed rates of return. The funds’ actuaries have long warned of that scenario and pressed for additional funding.

“Given the low funded ratio and the expected timing of employer contributions, the fund is still at risk of potential insolvency if an economic recession or investment market downturn were to occur in the near term,” the Municipal Employees Annuity and Benefits Fund warned in its 2021 report. “We strongly recommend an actuarial funding method that targets 100% funding where payments at least cover interest on the unfunded actuarial liability and a portion of the principal balance.”

During fiscal year 2021, the municipal fund liquidated $321.3 million in portfolio assets due to operating cash-flow deficits.

“The funded ratio is not projected to even reach 50% funded for another 21 years, until 2042,” the Policemen’s Annuity and Benefit Fund of Chicago warned in its 2021 report. “We continue to recommend that the plan sponsor seriously consider making additional contributions to ensure that there are sufficient assets available in the fund in all years to pay the promised benefits.”

“The city’s efforts in advancing meaningful solutions to the funding level is truly appreciated,” Daniel Fortuna, president of the Firemen’s Annuity & Benefit Fund of Chicago, said in a city statement announcing the $242 million payment had been made. “We look forward to working with the city to secure supplemental employer contributions on a recurring basis.”

The city has taken other steps to avert asset liquidation, last year advancing more than $500 million in scheduled payments so the funds could meet payout obligations. “They were advanced due to the combination of the delay in the second installment and the downturn,” Bennett said, referencing a delay in the second installment of property tax bills sent out at the county level and investment losses from the market downturn.

First installment 2023 bills will be due a month later this year. “The $242 million payment should help with liquidity to weather the delay in the first installment,” Bennett said.

The new funding policy does not carry penalties if the city opts not to make an additional payment and that does raise concerns among some market participants over whether the city will honor it in difficult financial times or whether future administrations will abide by it. Lightfoot is seeking a second term in next month’s mayoral election.

Gateway project gets first chunk of federal funds; billions more to come
Secure Gun Storage Is A Wellness Design And Real Estate Benefit
Rent prices have dropped the most in these 5 U.S. metros. Why it’s cheaper to rent than buy in many markets
Yellen says raising debt limit is only solution to avoid fiscal crisis
Litecoin ‘head fake’ rally? LTC price technicals hint at 65% crash