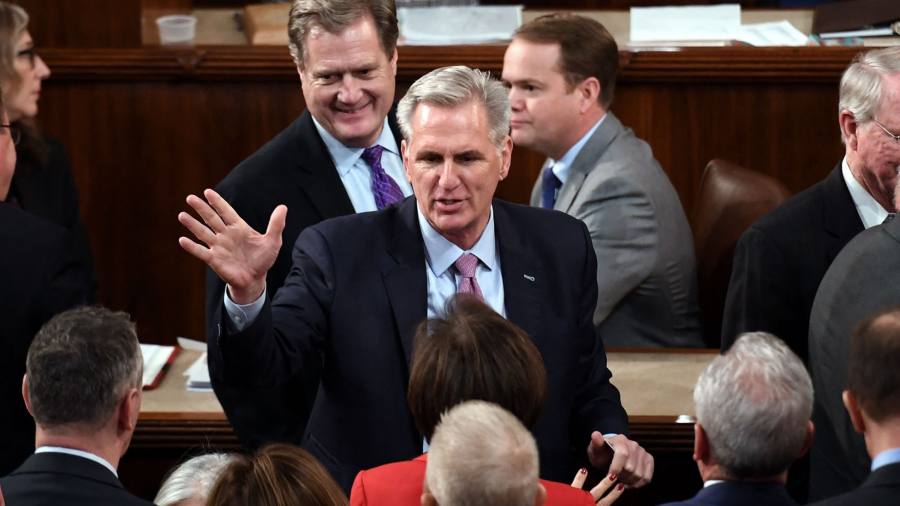 Kevin McCarthy has been elected as Speaker of the House of Representatives, ending a tortuous week of wheeling and dealing on Capitol Hill that exposed sharp divisions in the Republican party and raised fresh questions about whether Congress can govern effectively in the years to come.

McCarthy was elected Speaker just after midnight on Saturday with all but six Republicans backing his bid. The six opposing Republicans voted “present” — a technicality that reduced the critical number of votes required for McCarthy to seize the Speaker’s gavel.

It was the 15th round of voting since the process to elect a Speaker began on Tuesday. McCarthy is the first Speaker in a century to require more than one ballot to be elected.

“That was easy, huh? I never thought we would get up here,” McCarthy said with a laugh as he accepted the Speaker’s gavel from Hakeem Jeffries, the Democratic House minority leader.

“It’s not how you start, it’s how you finish. And now we need to finish strong for the American people,” McCarthy added.

The California congressman defied his critics when, after seemingly endless rounds of negotiations and concessions, he quelled enough opposition within his own party to be handed the Speaker’s gavel. Earlier in the night, McCarthy suffered a humiliating defeat when he lost the 14th round of voting by the narrowest of margins.

McCarthy appeared visibly upset by that result, and in a last-ditch attempt walked over to Florida’s Matt Gaetz and Colorado’s Lauren Boebert to try to get them to change their votes from “present”. Mike Rogers, a congressman from Alabama, appeared to lunge at Gaetz before he was restrained by another lawmaker.

McCarthy insisted the laboured process had united his party and would make them more effective in legislating in the months and years to come. But many in Washington questioned whether he had weakened his own hand and left himself in an exceedingly vulnerable position at the start of a new Congress.

One of McCarthy’s key concessions was approving a rule that would allow any single member of Congress to trigger a vote of no confidence in him or any future Speaker.

After the vote early on Saturday, US president Joe Biden released a statement congratulating McCarthy on his election as Speaker but warning him that “the American people expect their leaders to govern in a way that puts their needs above all else, and that is what we need to do now”.

McCarthy addressed Jeffries and the Democrats directly in his speech on Saturday morning, saying: “I promise our debates will be passionate, but they will never be personal. That’s my commitment to you.”

McCarthy faced an uphill battle to becoming Speaker in large part because the Republican “red wave” that he and others predicted did not materialise in November’s midterm elections. Instead, the Republicans eked out a razor-thin majority in the House, the lower chamber of Congress, and failed to regain control of the Senate, the upper chamber.

McCarthy was elected Speaker on the two-year anniversary of the January 6 2021 attack on the US Capitol that disrupted the certification of Joe Biden’s presidential election and left several people dead.

At the White House on Friday afternoon, Biden held a ceremony marking the anniversary and awarding a presidential citizens medal to several people, including state officials who resisted former president Donald Trump’s efforts to overturn the election results, and relatives of deceased Capitol police officers.