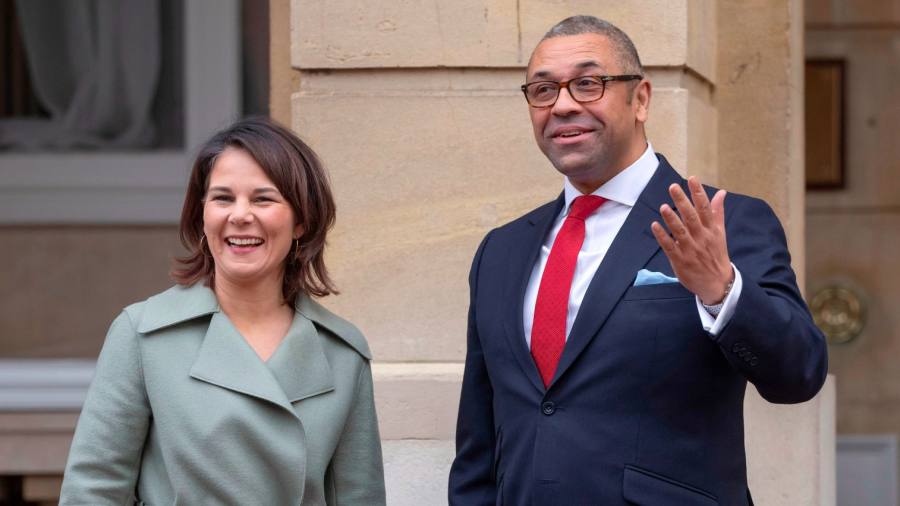 The German government has warned that its strained post-Brexit relationship with the UK will only be fully repaired once the bitter dispute over Northern Ireland’s trading arrangements has been settled.

Annalena Baerbock, Germany’s foreign minister, said ahead of a visit to London on Thursday that the implementation of the Northern Ireland protocol — part of the 2019 Brexit deal — was the “Achilles heel in the bilateral relationship.

“It’s essential that we find a responsible and pragmatic solution for Northern Ireland, on the basis of existing agreements,” she said. “Only then will we be able to exploit the great potential of our partnership.”

London and Brussels are trying to resolve a long-running dispute over the protocol, which keeps Northern Ireland inside the EU’s single market for goods to prevent a trade border on the island of Ireland. Talks are expected to intensify in coming weeks.

Speaking at a joint press conference, Cleverly boasted of the strength of Anglo-German relations but acknowledged that both sides wanted a resolution to the protocol.

“If this is regarded as an Achilles heel in the relationship, we are moving pretty fast and doing a huge amount of good work, notwithstanding that,” he said.

British officials have described the mood music between Cleverly and Baerbock as “positive”. “We are getting on with [EU] member states in a better way than we have done before — a lot of that is due to the co-operative approach on Ukraine,” one government insider said.

Senior politicians in Berlin are also hopeful that relations can be put on a stronger footing. “There’s definitely room for improvement,” said Jens Zimmermann, MP for the governing Social Democrats and chair of the Bundestag’s British-German parliamentary group.

He said the domestic political turmoil of the past year meant the UK had not had the bandwidth to invest in its ties with allies, making it hard to repair the damage caused by Brexit.

There was also relief among some officials in Berlin when Rishi Sunak became UK prime minister. Sunak and German chancellor Olaf Scholz have a good working relationship, dating from their stints as finance ministers.

“They co-operated closely on the deal to set up a global minimum corporate tax,” said one chancellery official. “So we’re hopeful we can have a constructive relationship.”

The Ukraine war has played a key role in bringing the two countries closer and in Berlin, there is a growing appreciation of the importance of Britain to Europe’s security architecture.

“Ukraine shows that the UK is a relevant player on all the big European security issues,” one diplomatic official said.

John Kampfner, executive director of the UK in the World Initiative at Chatham House, a think-tank, said: “The Germans are pragmatic; they know that in security . . . the Brits have an important role to play.”

Cleverly on Thursday said that Germany had shown “huge political courage” in standing by Ukraine, adding that London and Berlin were united in their “unwavering support” for the country.

But others warned that Ukraine had caused some bad blood between the two, with some German politicians resenting the negative tone adopted towards Germany in some British political circles.

Zimmerman said: “There’s been . . . a lot of criticism of [Germany’s] energy dependence on Russia, and not much willingness to acknowledge the role of ‘Londongrad’ [in Vladimir Putin’s economic system]. They don’t like talking about that.”

Meanwhile, some in London fear Germany may be less willing than the UK to back Ukraine in a long and bitter war.

Lord Kim Darroch, former UK ambassador to the EU and US, said: “There may not be a complete meeting of minds on Ukraine. The economic costs of the war . . . are weighing heavily on western governments, some of whom may be tempted to press [Ukraine president Volodymyr] Zelenskyy to go for a quick compromise rather than complete victory.”