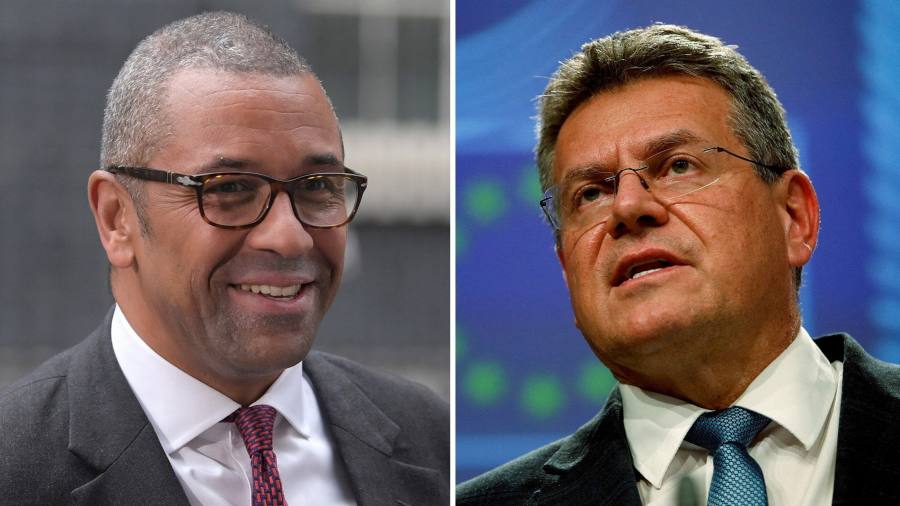 London and Brussels have secured a breakthrough in the corrosive dispute over Northern Ireland’s post-Brexit trading relations, clearing the way for a new push to resolve the longstanding issue.

After months of deadlock and acrimony, the UK and EU issued a joint statement proclaiming a tentative deal that would give Brussels access to the UK’s IT systems for trade across the Irish Sea.

Cleverly and Šefčovič will meet again on January 16, with EU and UK officials hoping the two sides could agree shortly afterwards to enter a final negotiating “tunnel” to resolve significant outstanding issues.

Securing a deal will be complex and fraught with political danger, not least for UK prime minister Rishi Sunak, whose Eurosceptic Tory MPs could turn against him if he is seen to have “sold out” to Brussels.

Pro-UK unionist politicians in Northern Ireland also oppose the Brexit trading relationship and are refusing to sit in the region’s elected assembly at Stormont until the issue is fixed.

But the atmosphere around the negotiations has changed dramatically since Boris Johnson, who negotiated the so-called Northern Ireland protocol in 2019, left office last September.

“They are now talking as friends,” said one EU official. “We are entering a new cycle and there seems to be a genuine will on both sides to get things done.”

Joe Biden, US president, has urged both sides to resolve the dispute before the 25th anniversary of the Good Friday Agreement at Easter and is hoping to visit Ireland and the UK around that time.

Meanwhile, UK and European leaders have also noted that it is foolish for western allies to be divided on Brexit issues when they should be uniting to counter the threat posed by Russia.

Allies of Cleverly said the two sides were not working to a specific deadline but said it was “a possibility” they could soon enter a “tunnel”, where talks are held in conditions of total secrecy until a deal is thrashed out.

The EU has complained about a lack of “real-time” access to the system that it says is needed to provide full visibility of goods travelling into Northern Ireland across the Irish Sea border, which was created by the deal on post-Brexit trading arrangements for the region.

In a statement, the two sides agreed that access to the UK’s data system was “a critical prerequisite to building trust”.

The Democratic Unionist party, which wants to scrap the protocol because it places a trading border between Great Britain and Northern Ireland, said: “This is not a time for sticking plasters. It’s time for a serious negotiation which deals with the fundamental problem.”

There remain significant political obstacles to sealing a grand bargain given the entrenched positions of opponents to the protocol, not least the role of the European Court of Justice in overseeing the trading arrangements on UK territory.

The EU has said it can loosen implementation but not rewrite the deal.

EU officials say that while the principle that the UK would share customs data on cargo going in and out of Northern Ireland in a timely fashion has been agreed upon, there are still some points to iron out.

The two sides have yet to agree on how detailed the data needs to be, said one. “There’s still some fine-tuning but we agree on the overall approach.”

On Monday DUP leader Sir Jeffrey Donaldson said there was now an acceptance in London, Dublin and Brussels that the Northern Ireland protocol was “a problem for unionists”.

An Irish government spokesman was last week forced to clarify that the new taoiseach, Leo Varadkar — who helped clinch the protocol deal with Johnson in 2019 — had not been calling for full-scale renegotiation of the protocol when he called it “too strict” recently.