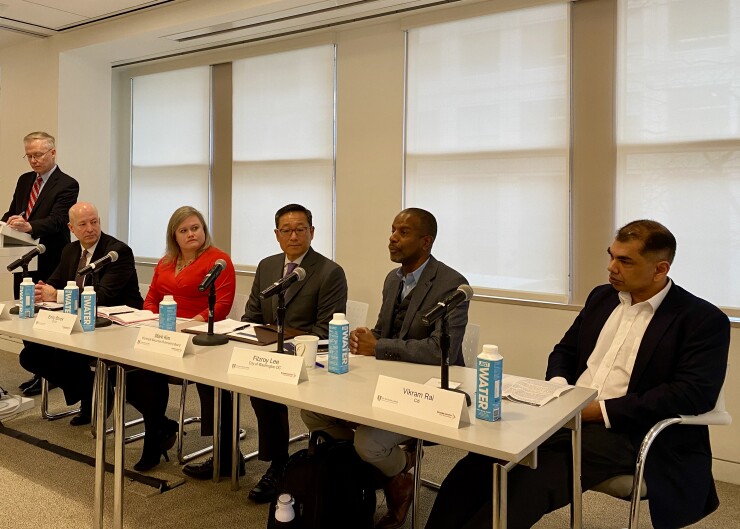 Muni leaders are airing disagreements and concerns about the Financial Data Transparency Act and other recent developments, highlighting some long-simmering tensions over how issuers disclose information to the market.

The multi-pronged discussion on FDTA and other hot topics occurred Thursday at the Richard Ravitch Public Finance Initiative Launch Symposium sponsored by the Volcker Alliance and hosted by the Pew Charitable Trust in Washington. The event was anchored by a study on Sustainable State and Local Budgeting and Borrowing. The study promotes a more active role for the federal government via a carrot of paying issuers for more robust disclosure combined with a stick of congressional oversight.

Vikram Rai, the head of Citi’s Municipal Strategy Group penned a report on the subject called “Don’t Fear the FDTA,” which offered what proved to be a controversial viewpoint about the law passed late in 2022.

“After the report went out, I realized that I was a minority opinion because I got a lot of very nasty emails,” he said Thursday.

Rai said he believes critiques of the FDTA, which requires municipal issuers to use uniform data standards when reporting financial information, are riddled with myths and misunderstandings. The new rules are targeted at bringing a new level of transparency to the muni market by requiring muni issuers to issue disclosures in a machine-readable, standardized accounting format. Other industry experts believe the new legislation is at best, unclear.

“There’s still so many unresolved issues with FDTA,” said Emily Brock, federal liaison for the Government Finance Officers Association. “It was a 300-page bill, and our section was two paragraphs, so chew on that. We were trying to get more information about what do they want. What kind of technology are they looking for?” The FDTA was attached and passed late last year as part of a defense bill, as opposed to earning its own unique vote.

Banging out the fine details of the contentious rule comes under the purview of the SEC with reliance on the expertise of the Municipal Securities Rulemaking Board, a point not lost on Mark Kim the MSRB’s president and CEO.

“I never look a gift horse in the mouth,” he said. “The SEC now bears that burden instead of the MSRB.”

Brock believes having the SEC in charge offers a tactical advantage of being able to appeal to Congress for more time and clarity to implement the changes.

Figuring out who’s in charge of the FDTA also raised hackles with the Government Accounting Standards Board.

“Who was making the decision about taking information that might come out of manual financial work, and what was the right information to provide?” said Joel Black, chair of GASB. “We didn’t want somebody else to do that. We thought that we were the right person to do that, because that’s our mission.”

Concerns from muni issuers include a two-year time clock for implementation, although Kim clarified that the SEC is tasked with establishing a data standard within two years and implementation might come with moveable goal posts. He also expressed concerns that a larger quantity of data provided through disclosure might not equate with quality.  The complexity of getting every muni issuer in the country on the same financial page was laid out by Fitzroy Lee, deputy chief financial officer and chief economist for the District of Columbia.

“We need to plan, we need to budget, and we need to be able to have a timeline for implementation,” he said. “We’re right in the middle of planning next year’s budget, so it’s a challenge for us because we don’t have a lot of details.”

Rai said he believes the industry needs to focus on marketing and more transparency would help.

“Foreign investors are desperate to invest in us and yet, we could not entice them to come,” he said. “That’s our failure. Security is one concern. Transparency is a very big concern. There is no standardization of data. So, what’s happening is that we are very retail-centric, retail gets spooked very easily.”

The ongoing debate over ESG also reared its head.

“While everyone agrees that there’s a lack of standardization and uniform disclosures with respect to ESG, issuers and investors are very divided over whether it’s a problem that needed to be solved,” said Kim. “We have seen instances in which issuers have a preference to ESG investors in the allocation of their bonds. Anytime one investor is given preferential treatment over another investor that raises regulatory scrutiny.”