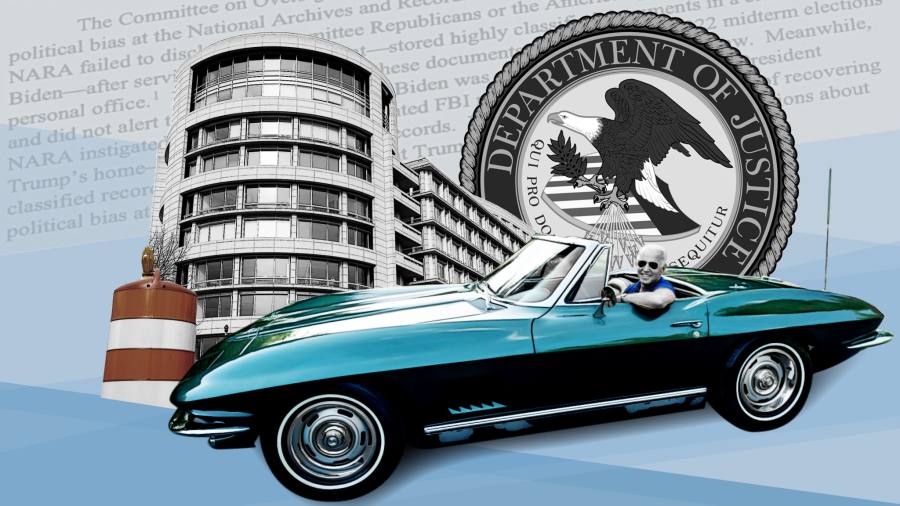 Joe Biden has been suddenly and unexpectedly engulfed in a legal and political morass surrounding his handling of classified government records dating back to his time as US vice-president.

On Monday, the White House said it had retrieved a batch of sensitive material in November from a private office Biden had used at a Washington think-tank. Then on Thursday it acknowledged the more recent discovery of another cache of classified documents in the garage of his residence in Wilmington, Delaware — also home to his classic Corvette.

The impact on Biden will depend on the nature of his personal involvement and conduct with regard to the files, but the case has resulted in a big headache for the president. On Thursday Merrick Garland, the attorney-general, said he would appoint a special counsel to examine his handling of the material.

The effect of the revelations could be profound, with implications for the federal probe into former president Donald Trump’s handling of a far greater trove of classified documents at this Mar-a-Lago estate in Florida, as well as Biden’s political future as he prepares for a re-election bid in 2024.

What was found and when?

On November 2, less than a week before the midterm elections, the president’s lawyers combed through Biden’s private office at the Penn Biden Center for Diplomacy and Global Engagement, a Washington think-tank.

There, in a locked closet, they found the first set of classified documents dating back to his days as vice-president, and turned them over to the National Archives. CNN reported that they contained information about Ukraine, Iran and the UK, but that has not been confirmed.

After that discovery, which triggered a review by the Department of Justice, Biden’s attorneys proceeded with a search of the president’s two Delaware homes to see if there was any other sensitive material to be found — a process that ended on Wednesday night.

They found a second stash of government records with classified markings in the garage of his home in Wilmington on December 20, and in an adjacent room this week. Biden’s team is also returning the second set of documents to the National Archives.

On Thursday a reporter asked Biden why he had kept such files next to the classic Corvette he keeps in his garage. He responded by quipping: “By the way, my Corvette’s in a locked garage . . . it’s not like they’re sitting out on the street.”

How is this case different from Trump’s?

The review of Biden’s potential mishandling of classified materials is significant because it comes amid a federal criminal investigation into Trump’s unauthorised possession of government records at Mar-a-Lago dating back to his time in the White House.

There are some similarities, for instance that in both cases it appears the classified documents were improperly transferred out of government facilities during the transition periods between two administrations in early 2017 and early 2021. But there are also some stark differences.

The first is a question of scale: Trump was hoarding more than 100 classified documents, while just 10 such files were found in Biden’s possession.

But the most important question concerns co-operation with federal authorities. While Trump resisted giving the documents up for months, in a stand-off with prosecutors that eventually led to a raid by federal agents, the White House says that Biden’s team immediately turned them over once discovered, acting in good faith.

How much trouble is Biden in?

From a legal perspective, Biden may not be in serious trouble unless he wilfully and unlawfully retained the sensitive government records, and then deliberately concealed them. So far it appears that this is more likely a case of sloppy handling of the papers by his staff during the 2017 transition, which was corrected as soon as it was discovered, involving no conflict with US authorities.

“We have co-operated closely with the justice department throughout its review, and we will continue that co-operation with the special counsel,” Richard Sauber, a lawyer for Biden, said on Thursday. “We are confident that a thorough review will show that these documents were inadvertently misplaced, and the president and his lawyers acted promptly upon discovery of this mistake.”

Even so, the revelations will be damaging to him because he has been scathing about Trump’s attitude towards classified documents, even describing it as “irresponsible”.

Some of the biggest questions surrounding Biden’s conduct involve transparency: why did he or the White House not publicly disclose the existence of classified documents at his private locations sooner? And when was he first made aware of the problem?

In addition, lawmakers on Capitol Hill are asking intelligence agencies to conduct a “damage assessment” to see if any sources or methods were compromised — the same scrutiny they demanded in Trump’s case.

Will this affect the Trump prosecution?

Since Garland in November appointed Jack Smith, a veteran federal prosecutor, as special counsel to look at the federal probes into Trump regarding the Mar-a-Lago documents case and his role in the January 6 riots, there have been expectations that the justice department would soon take the step of indicting the former president.

Trump is potentially facing some very serious charges, including violation of the Espionage Act for crimes related to national security, as well as the mishandling of government material and obstruction of justice. Smith’s inquiry has been proceeding, and should technically be unaffected by any parallel probe into Biden.

However, given the extremely sensitive nature of a possible Trump prosecution, the Biden revelations may lead the DoJ to take even greater time and caution in terms of building a case against the former president.

Biden’s document discoveries have to a certain extent shattered the political glow the president has had following a better than expected performance in midterm elections for Democrats, rebounding approval ratings and falling inflation, which has been the biggest economic problem of his presidency.

Biden has been widely expected to launch his campaign for re-election in the coming weeks with the political wind at his back, having brushed aside some of the Democratic calls for fresh leadership that had started to surface during the trough of his popularity last year.

So far, the criticism of Biden has come from Republicans, with conservative politicians accusing him of hypocrisy and double standards compared to Trump. But if Democrats begin to question his conduct, it could open up a new avenue for potential alternative candidates for 2024.