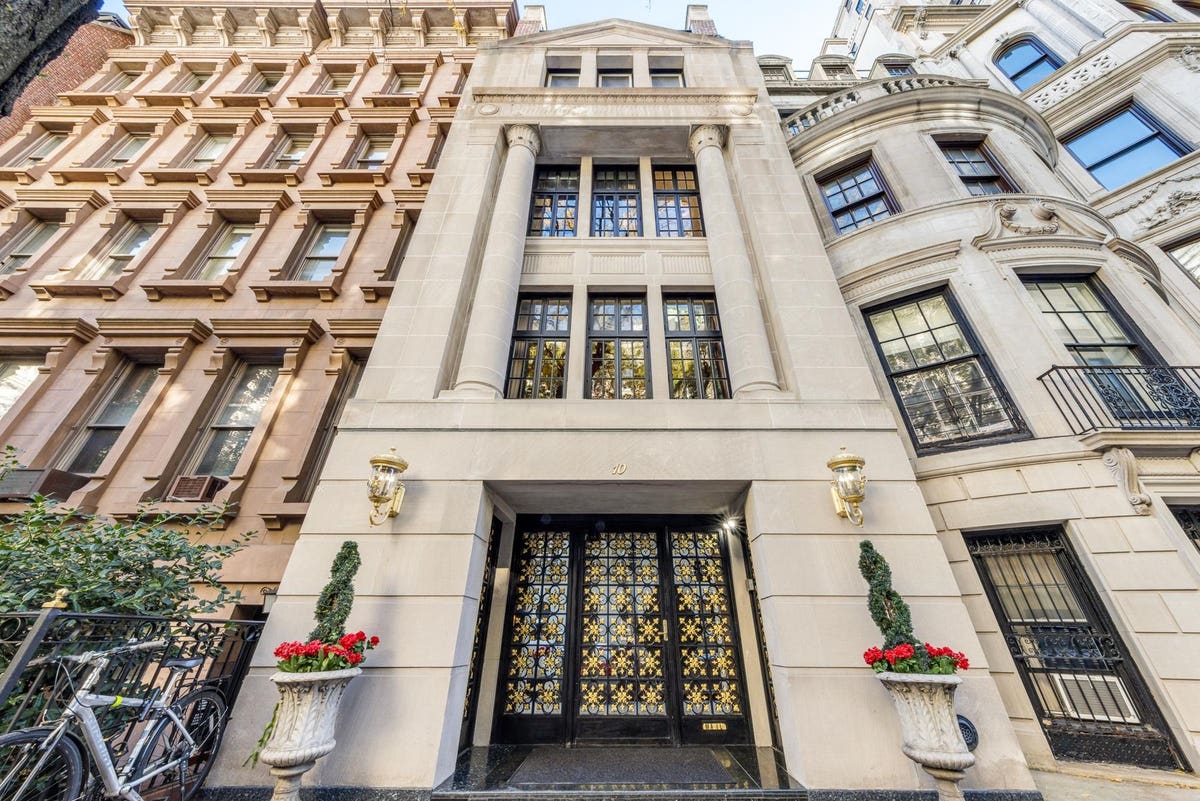 A lavish New York townhouse once owned by the late Ivana Trump is on the market for $26.5 million. Purchased for $2.5 million soon after her divorce from Donald Trump, the six-story, 8,725-square-foot home reflects Ivana’s big personality, her whimsical style and her passion for interior design with gold leaf, crystal chandeliers, pink marble and animal-print wall coverings.

Ornate double doors open onto a stately formal gallery with blood-red carpets, gilded paneling and an immense Italian crystal chandelier. A sweeping, curved marble staircase leads to the second floor entertainment level, where soaring ceilings, gilded fireplaces and a sumptuous Versailles-inspired dining room with floor-to-ceiling windows looking out onto the private interior courtyard hosted famous actors, luminaries from all industries and even royalty.

An old fashioned, bird cage-style elevator leads to the upper floors. The third level is devoted to the spectacular primary suite complete with a painted mural, leopard-print library, a private terrace with stunning French doors and an opulent executive office clad in leopard print complete with a gold-and-black marble fireplace.

The en-suite bathroom features pink Onyx marble with gold hardware and includes an enormous soaking tub, double sinks and mirrored vanity. Five additional bedrooms, each with its own chic style, occupy the next two floors, while a media room, second office and basement Swedish sauna round out the home’s lavish offerings.

The limestone townhouse was built in 1879 and features a columned facade, mansard roof and one-of-a-kind, gold-and-black grilled doors. Located on a coveted block of New York’s Upper East Side between 5th and Madison Avenues, it is directly across from the former mansion of Ivana’s friend Donnatella Versace and within walking distance from Central Park, the opulent shops of Madison Avenue, world-class dining and Manhattan’s famous museums. Known for its gorgeous brownstones and upscale high-rises, the Upper East Side is one of Manhattan’s poshest neighborhoods. Other celebrities who call the area home include Mariah Carey, Ricky Martin, Samuel L. Jackson, Mia Farrow and Drew Barrymore, according to TopTenRealEstateDeals.com.

Donald Trump’s first wife and mother of Ivanka, Donald Jr. and Eric Trump, Ivana Trump was a model, socialite, competitive skier, interior designer, fashion-and-perfume mogul and a behind-the-scenes force on many of Trump’s most important deals of the 1980s. Her marriage and subsequent divorce to the future 45th president were the subject of extensive media coverage, including interviews with Oprah Winfrey and Barbara Walters.

After the divorce, Ivana started her own fashion lines, wrote several books, made a cameo in the blockbuster comedy First Wives Club, competed on Celebrity Big Brother and hosted her own reality show Ivana Young Man in which she helped wealthy older women find young partners. Her final marriage, in 2008, was to an Italian model 23 years her junior. Ivana died July 14, 2022 at the age of 73 and is survived by her mother, three children and 10 grandchildren.