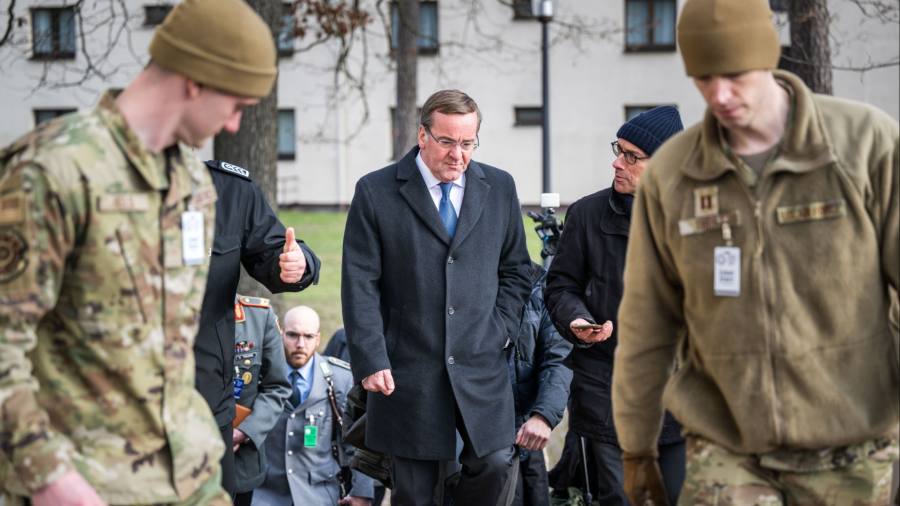 Germany dashed its allies’ hopes that it would approve the dispatch of battle tanks to Ukraine on Friday when a high-profile defence ministers meeting failed to reach an agreement.

Many western countries argue that the German-made Leopard 2 battle tanks would greatly help Kyiv mount a counteroffensive against Russia, but Berlin has yet to agree, despite weeks of intense pressure from its allies.

“[The Germans] have not made a decision on the provision of Leopard tanks,” US defence secretary Lloyd Austin said after the meeting in Ramstein, western Germany.

Berlin’s approval is necessary not only for sending its own Leopards, but also for the transfer of those held by 12 other European nations.

Ukraine says it needs more heavy armour to help it retake territory before Russia, which has mounted a huge mobilisation campaign, can refit and regroup.

Boris Pistorius, Germany’s new defence minister, said his ministry would check the army’s inventories of Leopards to see how many could be provided to Kyiv, as it continues to deliberate whether to release them to Ukraine.

He said the review would try to establish whether the Bundeswehr’s Leopards are compatible with the systems that Germany’s partners use and how many of them are available.

“It’s not prejudging the decision — it’s simply preparing for the day that might well come,” Pistorius added. “Then we would be able to act immediately and provide the support within a very short time.”

Olaf Scholz, chancellor, has insisted Germany will not go it alone on the tank issue, indicating he will only act in concert with the US. But Biden administration officials argue the Leopards, which are lighter and easier to maintain than the US-made Abrams tank, are better suited to the war in Ukraine.

“American partnership and a new defence minister provided the perfect cover for Scholz to move on this,” said one western diplomat in Berlin. “But he dodged it, infuriating half his partners.”

The US argues that supplying Ukraine is a matter of urgency. “We have a window of opportunity here between now and the spring, whenever they commence their operation, their counteroffensive, and that’s not a long time,” Austin said.

But the US secretary of defence defended Germany as a longstanding “reliable ally”, adding that the debate on arming Ukraine was about more than just tanks. “This isn’t really about one single platform,” he said.

Pistorius also hit back at claims that Berlin was the sole block on sending tanks to Ukraine. “The impression that occasionally arises that there’s a united coalition and Germany is standing in the way is wrong,” he said, adding that there were “many allies” who shared Germany’s view of the tanks issue.

Some German MPs were baffled by Pistorius’ statement. “It’s alarming that it took a new defence minister to check how many Leopard tanks we have, only now, 11 months after Russia attacked Ukraine,” said Marie-Agnes Strack-Zimmermann, head of the German parliament’s defence committee.

After the meeting, Graham conveyed exasperation with the Germans’ reticence to provide more support.

“I am tired of the s*** show surrounding who is going to send tanks and when are they going to send them. Putin is trying to rewrite the map of Europe by force of arms. World order is at stake,” Graham said. “To the Germans: send tanks to Ukraine because they need them. It is in your own national interest that Putin loses in Ukraine. To the Biden administration: send American tanks so that others will follow our lead.”

Additional reporting by Sarah Provan in London, Raphael Minder in Warsaw, Laura Pitel in Berlin and Lauren Fedor in Washington